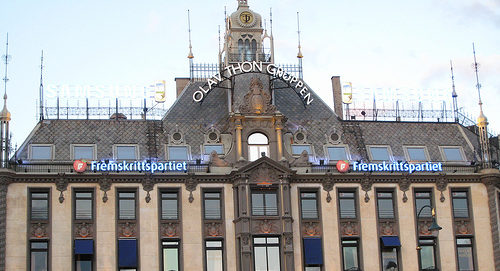 The Progress Party's Oslo HQ - Imbecillsallad on Flickr
The woman claims that the two men, one from the party's youth wing and the other from the main party, raped her at a private party event in early August.
"She has no wish to damage the party," the woman's lawyer Hege Solomon told NRK. "At the time it happened, she reported the incident to [party leader] Siv Jensen and Aina Stenersen by e-mail, but she has received no response."
"We are talking about a victim who has a strong loyalty to the party. That is one of the reasons why she did not want to report the case at an earlier stage."
The two men have temporarily stood down from their positions in the party while the prosecution takes place.
One of the man told NRK that he was "puzzled" by the accusation, but promised to "cooperate 100 percent" with the police in the case.
Per Arne Olsen, head of  Progress's organizing committee, denied that the woman had sent an email to Siv Jensen, saying that the Progress leader had only learned of the case on Thursday morning.
But Aina Stenersen, Progress Party's deputy leader in parliament, confirmed that she had received a message from the woman over Facebook in August.
"I got a message at midnight on Facebook. The next morning I printed it out and gave everything to the party's organizing committee," she told VG.
She would not say whether she had answered the woman's message.