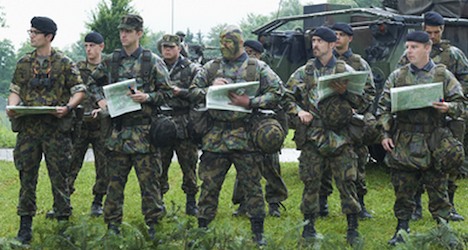 Armed neutrality has been the cornerstone of Switzerland's defence policy for almost two centuries, with soldiers straddling the civilian and military worlds, keeping their weapons at home when they are not in training.

The plan was opposed by the political right and centre, as well as parliament and Switzerland's cross-party government.

"This is a strong sign of support for our army and our security," said Defence Minister Ueli Maurer, who currently holds Switzerland's rotating presidency.

"This shows how attached the Swiss are to their militia army," he said.

The Swiss apply the label "militia" not only to their army, but also to the national tradition of part-time politicians, volunteer firefighters and others who serve the public.

Since 1992, non-military service, for example in environmental projects, has been available for conscientious objectors.

Direct democracy is another bedrock of Swiss society.

The question on Sunday's ballot papers was a basic "Yes" or "No" for ending compulsory military service.

"The people weren't taken in by this wrongheaded question," said Denis Froidevaux, head of the Swiss Officers' Association.

"That doesn't mean that criticism or proposals should be ignored," he added, signalling the military's openness to reform.

For budgetary and strategic reasons, Switzerland had repeatedly reduced its number of trained troops from 625,000 five decades ago to 155,000 today.

But critics say that is still way too big in a nation of eight million.

By comparison, neighbouring Germany has 10 times the population and 183,000 active troops.

While many Swiss cherish their military tradition, there is also an anti-army current in a country which has not been invaded since the early 1800s, despite major scares during the First World War and the Second World War.

Anti-draft campaigners say that Switzerland should follow other European countries which have ditched the draft since the end of the Cold War.

Spearheaded by pacifists and left-wing parties, the "Yes" camp acknowledged that it had faced an uphill fight.

"I think the main reason is that the vote ended up being seen as about the Swiss identity, with citizen-soldiers standing ready to defend the borders," said Tobias Schnebli of the anti-military group GSoA.

"But it's the worst thing in the world to think that something is natural just because it exists," he told AFP.

"The over-fifties have a particular vision of Switzerland.

"We place our hopes in today's younger generation, the ones who don't see it as us against the outside world."

The pacifist campaigners will now aim to muster support for a vote against the planned purchase of 22 Swedish Gripen fighter jets.

Draft supporters say that while Switzerland is ringed by friendly nations, the army in its current shape is essential in a world of morphing threats, and plays a key role in disaster relief.

They also underline that European nations which axed conscription struggle to fill their ranks even with unemployment high amid the economic crisis.

They also say the draft helps cement a country with three main language groups — German, French and Italian — and cuts across class lines.

Critics reject those arguments, saying the prospect of invasion is a fantasy, that language groups stick together when in uniform, women do not have to serve, and almost half of draftees do not start or complete their training on health or other grounds, with middle class urban dwellers more able to avoid it.

Men who do not serve in the military pay a special tax of four percent of their salary instead.