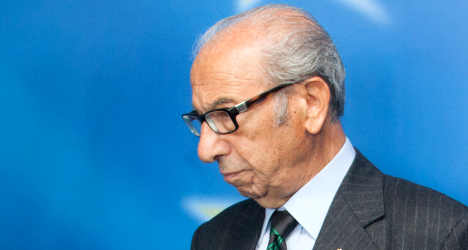 Harry Shindler has lived in Italy since the 1980s. Photo: The right to vote campaign

“We had a war to bring back the vote to the people of Europe,” says Shindler, who was at the liberation of Rome in 1944.

The 93-year-old emigrated to Italy nearly 40 years later. As a European citizen he has the right to live in Italy, but he cannot vote in the country’s national elections without becoming an Italian citizen.

Many foreigners living in Italy face the same restriction and vote in their home country.

But for British people, once they have been living abroad for 15 years they are effectively cut off from the country’s democracy as they lose their voting rights.

Shindler has spent the past 12 years fighting to get his vote back, taking the case to British MPs and the European Court of Human Rights (ECHR).

He lost his case at the ECHR in May and saw his appeal rejected earlier this month, but Shindler is determined to fight on and argues that the British government’s view is outdated.

“There’s no question that we’ve loosened our ties to the country. We have family and friends in the UK, we go backwards and forwards. I can get to London quicker by plane than an MP can from [the English city] Carlisle,” he tells The Local.

Furthermore, Shindler says that decisions continue to be taken by the British government which directly affect him – and other citizens who have lost their voting rights – over which he has no control. The 93-year-old draws a British pension, for example, while other expats pay tax in the UK.

Although he cannot get his vote back through the ECHR, Shindler has been busy campaigning in Brussels. On September 5th he and a number of other British expats met Viviane Reding, the EU’s justice commissioner, to discuss the issue.

“There are Brits all over Europe campaigning for this; at the end of the day, we will get the vote,” he says confidently.

Meanwhile, Shindler has been preparing the case to present to the UN. The British government’s law goes against the Universal Declaration of Human Rights, he says, which declares that everyone has the right to participate in their government.

“The small men who deny us the vote will be forgotten, but we will have the vote.”

Shindler hopes he will have his voting rights back in time for the UK’s general election in 2015, almost a century after the Suffragettes won their battle.

Don't want to miss a story about Italy? – Then join The Local Italy on Facebook and Twitter.