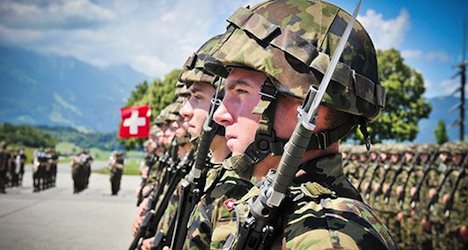 On September 22nd, citizens across Switzerland will decide whether to abolish military conscription. Indications are they aren’t likely to do so: a survey by Swiss television in August revealed that 40 per cent of respondents would turn down the initiative, with another 17 per cent leaning that way .

The apparent steadfast support for mandatory military service may be perplexing for some outsiders: the quiet, politically neutral country sits in the heart of a united Europe. But the Swiss believe in armed neutrality, with a large military protecting their independence.  While all agree that invasion by another country is not a danger, there are other threats such as terror attacks or even natural disasters. Many citizens are concerned about what may happen to their armed forces if mandatory enlistment is lifted.

“This is another step to the abolishment of the army in Switzerland,” Kurt Dürig, president of the military shooting club in Winterthur, tells The Local. Dürig was a professional soldier in the Swiss Army for more than three decades.

“When we don’t have an army anymore, who will protect Switzerland?” asks Dürig, who opposes the initiative. “The armed forces are still very well anchored in Switzerland.”

Others see things differently, most notably the Group for a Switzerland without an Army (GSoA), which is behind the September 22nd initiative to get rid of the mandatory military service. The group, founded in 1982 with the aim of abolishing the army, believes that conscription is archaic and expensive.  It reckons that the conscripted army costs Switzerland 4.7 billion francs ($5.07 billion) annually, with an additional impact of four billion francs on the economy due to workplace absences. GSoA also believes conscription is outdated as it treats men and women differently.

While there is mandatory military service for all men 18-34 years of age, women face no such enlistment requirements and will only serve if they volunteer to do so. The group argues that Switzerland does not need a military of some 186,000 soldiers, and that a volunteer army would suffice in addressing the country’s security needs.

While GSoA is well aware that the initiative may be turned down, they are still hoping for a strong showing of support for their stance as they continue their fight. “The more ‘yes’ votes we receive, the greater the pressure will be to reform the army,” says Seraina Patzen, a GSoA spokeswoman.

It’s proving to be a difficult battle for GSoA. The military, alongside neutrality, is firmly embedded in the Swiss psyche. Both are viewed as critical tools to protect Switzerland’s independence.   The Swiss have never taken this task for granted. The size of its territory and location made the country vulnerable to attack. It was also crucial to maintain peace at home considering the heterogeneous mix of its population with four different language groups, according to a publication from Switzerland’s Federal Department of Foreign Affairs.

The Swiss continue to pursue a policy of armed neutrality today, opting out of groups such as NATO (North Atlantic Treaty Organization) while maintaining a military force. After their initial training at 18, soldiers go back to their civilian lives but remain in military service. A small percentage pursues a professional career in the armed forces.

“Switzerland needs an army,” says Jakob Büchler of the Christian Democrat Party (CVP), a member of the National Council, which rejected the initiative.  “We are a small country, we are a neutral country, and we are a country that isn’t in any defense alliances. We have to therefore organize our own defense and security ourselves, and that’s why we need an army.”

There’s another reason why the Swiss may not be keen to do away with conscription. The armed forces are a cornerstone of Switzerland’s militia system, according to Tibor Szvircsev Tresch, a lecturer in military sociology at the Military Academy at ETH Zurich, where professional officers in the Swiss Army are educated.

Every Swiss citizen is supposed to do their part to help society, whether it’s serving in the military, firefighters, politics or other public duties.

Those in the Swiss Army already serve as backup for the police when there are natural disasters or other major events such as the World Economic Forum in Davos, a similar model to the National Guard in the United States, according to Szvircsev Tresch.

“We have a very unique social system with this militia principle,” Szvircsev Tresch tells The Local. “The armed forces were the biggest militia organization in the past. The armed forces are a big part of society.”

Indeed, Andreas Müller, vice director of think tank Avenir Suisse says Swiss citizens have traditionally thought of themselves as participants rather than customers of the state because of this militia system. But that world is changing as less people are prepared to do volunteer work, according to Müller.

Avenir Suisse believes that there is need for a much broader discussion about the future of Switzerland’s militia system after the September 22nd vote. Avenir Suisse has proposed the idea of introducing a mandatory civil service for everyone in Switzerland, be it man, woman or foreigner. They could choose to serve in the army, population protection or civil duties, according to their proposal.

The Swiss Army has already been forced to adapt since the end of the Cold War. Their ranks have declined dramatically from 350,000 in 2003, and are set to drop further to 100,000 in coming years. Since 1996, recruits who are conscientious objectors have been offered the option of serving an extended period in the civil service as an alternative to military service.

Support for conscription is particularly strong among older generations with 68 per cent of those 65 years and older saying they would vote against the lifting of conscription compared with 40 per cent of citizens aged 18 to 39, according to the Swiss television poll.

Opponents to the initiative fear that there won’t be enough suitable volunteers for military service. Switzerland would then have to initiate a costly makeover into a professional military.

“People say look at the world around us; it’s not as peaceful as we always believe,” Büchler says. “The army is the big security buffer for our country.”