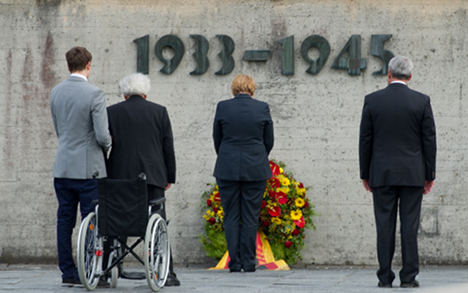 Ahead of the beer-tent rally for supporters in Dachau, northwest of Munich, Merkel spent an hour at the site, making a short but emotional speech, laying a wreath of flowers and touring the remnants of the camp with a handful of survivors.

“The memory of the prisoners’ fates fills me with deep sadness and shame,” said Merkel, 59, the first German leader born after World War II.

“Each detainee at the camp of Dachau or the other concentration camps of course had a personal story that was disrupted or even destroyed.”

A visibly moved Merkel said that the camp, whose main gate still bears the sinister Nazi motto “Work Will Set You Free” (Arbeit Macht Frei), stood for “a horrible and unprecedented chapter of our history.”

“At the same time, this place is a constant warning: how did Germany reach the point of taking away the right of people to live because of their origin, their religion… or their sexual orientation?”

Merkel said the “vast majority of Germans” had closed their eyes to the mass slaughter in their midst and did nothing to help Jews or other victims of the Nazis.

She said her visit was intended “to be a bridge from history to the present and into the future that we want to continue to build.”

The chancellor came at the invitation of 93-year-old Dachau survivor, Max Mannheimer, who called Merkel’s decision to pay her respects “historic”.

But while Holocaust survivors hailed a long overdue gesture, the opposition blasted a “tasteless” combination of electioneering and historical atonement.

Immediately after her visit, Merkel held a campaign rally at a fair in town ahead of a Bavarian state poll and the German general election next month.

A leader of the opposition Green party, Renate Künast, slammed Merkel’s programme as a “tasteless and outrageous combination”.

“If you’re serious about commemoration at such a place of horrors, then you don’t pay such a visit during an election campaign,” she told the daily Leipziger Volkszeitung.

News website Spiegel Online said in a commentary that it was a visit “to the right place at the wrong time.”

“A little more sensitivity in the planning wouldn’t have hurt,” it said, while adding that it believed Merkel’s motives had been sincere.

The leader of Germany’s Jewish community, Dieter Graumann, said he would not be drawn into “constant sniping.”

“If the chancellor had only held an election rally in Dachau, she would have been attacked for not visiting the concentration camp memorial,” he told Spiegel Online.

Jean Samuel, a French resistance fighter held at Dachau from July 1944 until the camp’s liberation in April 1945, said that regardless of Merkel’s campaign schedule the gesture was important.

“We are fighting for the duty to remember so I hope that is also why she came,” he told AFP at the ceremony.

Germany’s most prominent Holocaust historian, Wolfgang Benz, said the visit was welcome but the timing unfortunate.

He said the stop at Dachau seemed like an afterthought “if you, just before you hold a rally under a marquee, lay a wreath and express your dismay”.

“It’s rather little and very, very late,” he told a local public broadcaster.

The Nazis opened Dachau as a concentration camp for political prisoners in March 1933, just weeks after Adolf Hitler took power. It was the first such site in Germany and served as a model for all the camps to follow.

More than 200,000 Jews, gays, Roma, political opponents, the disabled and prisoners of war were imprisoned at Dachau. Over 41,000 people were killed, starved or died of disease before US troops liberated the camp in April 1945.

The memorial now attracts some 800,000 visitors each year.

Although it was the first visit by a German chancellor to Dachau, Merkel had gone to other former Nazi concentration camps including Buchenwald with US President Barack Obama in April 2010.

And former president Horst Köhler, whose office is largely ceremonial, attended commemorations of the 65th anniversary of the Dachau liberation three years ago.