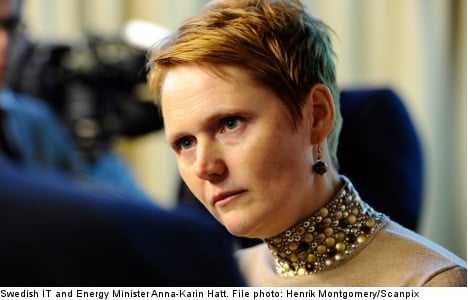 “When not even the Sweden’s IT minister complies with copyright law online, one can hardly expect ordinary internet users will feel compelled to follow such an outdated law,” Pirate Party justice policy spokesman Torbjörn Wester said in a statement.

The Pirate Party, founded in Sweden in 2006, filed the complaint against IT and Infrastructure Minister Anna-Karin Hatt to mark the ten-year anniversary of the launching of The Pirate Bay, the popular Swedish file sharing site whose founders were convicted of aiding copyright infringement in a high-profile 2009 trial.

The Pirate Party’s complaint cites several copyrighted images posted on Hatt’s Instagram account, including images of Calvin and Hobbes cartoons, as well as artwork from several movies including The Lord of the Rings and Monty Python and the Holy Grail.

According to Wester, the Pirate Party filed the police report against the minister to draw attention to how antiquated current copyright laws are.

“Everyone breaks copyright law all the time. People share knowledge and culture with one another – we’ve done that throughout history and new technology has given us fantastic new possibilities,” said Wester.

“But many of these new possibilities are illegal. That has to change. It’s absurd that half a million Swedes risk going to prison due to outdated laws.”

When asked about the police report by the Nyheter24 news website, the minister refused to offer any reaction.

“We’ve noted that you wrote about it but we have no further comment,” Jonas Johansson, a spokesman for Hatt, told the site.

Wester admitted, however, that there was little chance the police would take action against the minister.

“When it comes to online crimes some people are more equal than others. Companies with lots of resources and prominent politicians don’t really have much to fear, while at the same time the police hunt down file sharing younsters,” said Wester.