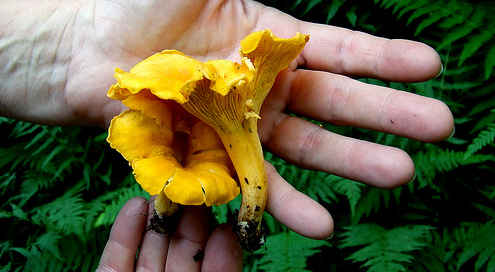 Chanterelles - Dave Bonta
The rain showers that hit Norway last week have come to the rescue of the country's mushroom pickers, causing their prized chanterelles to sprout in shady woodland glades across the country.
"Its going to be a good season I think," Reidun Braathen, the head of the Norwegian foraging association, told The Local." I've been out in the forests this weekend and picked a lot of mushrooms."
An unusually dry summer had led to a dearth of mushrooms, with almost no chanterelles visible in June or July.
"It has been a very dry summer and the season for chanterelles has been delayed," Braathen said. "All mushrooms need some humidity to grow, so if it's a very dry season, with no rain, there will be no mushrooms."
Braathen said a fantastic summer for berry-picking had more than made up for the mushroom shortage.
“It’s been a very very good year for berries," she said. "There are lots of blueberries, and it looks like there are a lot of cranberries and cloudberries too." 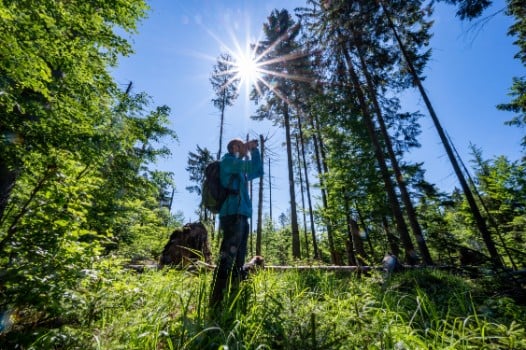 The bark-gnawing beetle hadn't been seen in the Bavarian Forest for 113 years. It was considered extinct there. Then, in autumn 2019, the biologist Jörg Müller discovered a specimen of the small insect on a spruce stump.

A real relic of pre-cultivated forests, the bark-gnawing beetle needs plenty of dead wood and tree moss if it is to survive.

But, thanks to a philosophy of letting nature do its thing, there is enough dead wood and moss in the Bavarian Forest national park to go around.

The oldest national park in Germany, the Bavarian Forest Park was founded 50 years ago this week.

Its founding goal has been achieved, says director Franz Leibl. The reserve has increasingly developed into something akin to an ancient forest.

Around 11,000 animal, fungal and plant species have been identified in the reserve – including 16 different species of forest beetle, which are reliant on forest structures undisturbed by humans.

Bats, red deer, lynx and beavers also feel at home in the reserve – as does the dreaded spruce bark beetle. The bark beetle species poses a particular challenge to the National Park as well as to private and commercial forest owners.

After a massive infestation of bark beetles in the 1990s, the forest has now recovered. Luckily the destruction left by the fearsome beetle also serves a purpose – the dead trees now serve as a habitat for rare species that depend on dead wood.

During a walk through the forest, Jörg Müller points out tree stumps where fungi have spread.

“It takes about three weeks for the bark beetle to kill a tree,” he explains. “Then the mushrooms come.”

In nature there are always winners and losers, Müller adds.

In the national park, 200 species of mushroom have benefited from deadwood. The barbastelle bat was also endangered until the bark beetle “created a great habitat for it.”

At the edges of the national park, spruces infested by the bark beetle have been removed to prevent it from spreading to adjacent forests.

“The table was set, and then the big feast began,” Müller says.

The National Park can also boast a completely different kind of resettlement: the beaver has discovered the Bavarian Forest and 25 of the protected animals now live in the national park.

The corona pandemic has put 50th anniversary celebrations on hold. However, Leibl promises that this will be made up for next year.

The expansion would create the largest forested national park in the country.