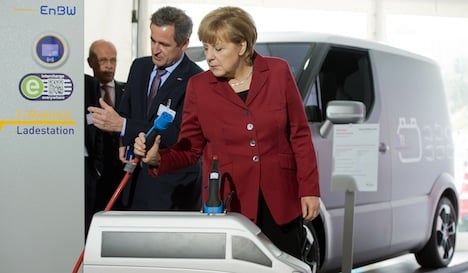 The number of electric vehicles registered in Germany is just some 7,000.

But Chancellor Angela Merkel put on a brave face in light of the statistics,

speaking this week at a government-organised international forum in Berlin, where she affirmed that she is a believer in electric mobility.

“Our plans are ambitious,” she conceded about the one-million goal pronounced by her government in 2009. “But we have a good chance of sticking to the timetable.”

Her government has spent almost €1.5 billion ($1.9 billion) to subsidise research and development in electric mobility and is promoting the models by scrapping car registration tax for the first 10 years.

However, unlike neighbouring France, Germany does not offer bonuses for the purchase of electric vehicles.

Electric cars produce no exhaust pipe emissions and can help clear the air in congested cities, while their carbon footprint ultimately depends on the type of energy used to charge their batteries.

Problems so far include the high cost of the batteries, usually lithium-ion types, and limited networks of charging stations, which make drivers fear being left on the side of the road with dead batteries.

After Japan’s 2011 Fukushima nuclear accident, Merkel rang in an ambitious energy transition away from fossil fuels and nuclear power towards renewables such as wind, solar and biofuels.

Speaking on Monday, she said the push for electric cars would dovetail with that plan, to ensure that the power that drives electric cars is produced from clean, alternative energy sources.

She said electric cars could be a “core sector of our industrial production,” with the auto sector making up one quarter of Germany’s exports. But so far Germans, used to putting their gas pedals to the floor on the famous autobahn highways, have been slow to accept electric cars.

In the first four months the year, only about 1,500 electric cars were newly registered, after a total of about 3,000 last year. There are also 65,000 registered hybrid vehicles with both electric and fuel engines.

Henning Kagermann, coordinator of the Platform for Electric Mobility that evaluates the electric car strategy, said that, under current conditions, 600,000 electric vehicles is a more realistic figure for 2020.

“Electromobility is treading water,” said Ferdinand Dudenhöffer, director of the automotive research centre of the University of Duisburg-Essen.

He said so far the market share of electric and hybrid cars is just 0.13 percent, calling it “less than a niche of a niche market.”

But proponents say the boom is just around the corner. German carmakers plan to launch about 15 electric car models by late 2014, with plans to move into mass production by 2017.

Over the next three to four years, German industry is set to invest about €12 billion to develop alternative fuel engines.

VW chief Martin Winterkorn — whose company this year launches its new electric Golf — said at the weekend that the government must help by improving infrastructure, such as a network of charging stations and incentives such as electric-car-only lanes.

In comments to the newspaper Bild am Sonntag, he said the one-million goal was realistic if prices fall with mass production, adding: “I am convinced

that that can happen.”

Transport Minister Peter Ramsauer also insisted “the government sees no reason to step back from the goal of one million electric cars by 2020. The first steps are usually the hardest, but sales will increase rapidly.”

Philippe Varin, chief executive of PSA Peugeot Citroen, said “it will be a gradual process over 10 years” to convince consumers to embrace first hybrids and plug-in hybrids and finally 100 percent electric vehicles.

Through the gas price cap, the so-called Gaspreisbremse, both German residents and companies will receive retrospective relief for their gas costs starting in January 2023, according to the draft.

Previously the relief payments were set to stretch between March 2023 and spring 2024, with 25,000 larger businesses, as well as almost 2,000 hospitals and schools to receive the help starting in January.

READ ALSO: How much could households save under Germany’s new price cap?

The German government is reacting to the sharp rise in energy prices with energy price brakes worth billions and wants to soften the blow on both private households and companies.

Germany will also be divvying out a one-off energy relief payment in December.

READ ALSO: When will people in Germany get their December gas bill payment?

How much will households and businesses receive?

Under the gas price cap, households and small and medium-sized enterprises are to receive a guaranteed gas gross price of 12 cents per kilowatt hour for 80 percent of their current consumption. For the remaining 20 percent of consumption, the contract price is set to apply.

For district heating, the guaranteed gross price is to be capped at 9.5 cents.

Starting in January, a gas price brake is also planned for industry. These large consumers are to receive a guaranteed price of 7 cents per kilowatt hour net for 70 percent of their previous consumption volume.

The largest part of the energy price brake is to be financed by a “defence umbrella”, or special reserve, totalling up to €200 billion. The government is still taking on new debt in order to finance the energy caps.

Russia’s war against Ukraine has increasingly aggravated the situation on the energy markets in Germany and Europe in the course of 2022, the draft states.

In particular, the recent large price increases for natural gas and heat represent a “considerable, in some cases existence-threatening burden for residents and companies in Germany,” it continued. “They are an enormous socio-political and economic challenge.”