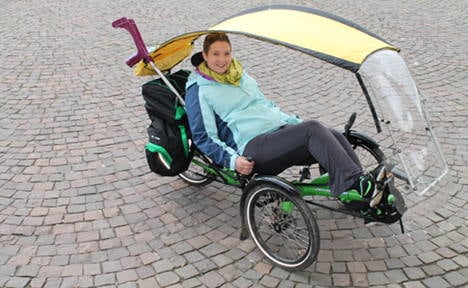 For lots of young adults with cancer, the pain of falling ill can go far beyond the physical. Survivor Friederike Kaup explains why she wants to set up a shared flat as an alternative for those battling the disease.

Twenty six-year-old Kaup was diagnosed with osteosarcoma, a type of bone cancer, in 2010. Unable to continue living a shared flat, known as a Wohngemeinschaft or WG in German, with other students, she had to leave university and move in with her parents.

“There comes a point when people can do no more to help,” said Kaup. This is especially hard for a parent living with an ill, grown-up child.

“Mine aged a lot that year from stress,” she told The Local, explaining that it was this time at home that gave her the idea for a “Chemo WG” – a shared flat in which young cancer sufferers can group together somewhere nicer than a hospital.

Living in a flat where professionals come in and clean, and food can be delivered could be, Kaub thinks, the solution for many who accept that they need help but want to maintain independence. “Everyone needs to shut the door and not come out for a day, but at home with your family that often isn’t possible – at least it wasn’t for me.”

After surgery to replace bone in her right thigh with titanium and months of chemotherapy, Kaub is officially tumour free, and has thrown herself into drumming up enough support – and money – to make the Chemo WG a reality.

Too old to be back at home?

Ideally the flat would be on the ground floor – Kaub learnt the hard way that climbing the stairs to a flat on the fourth floor is near-impossible after a round of chemo – and be for just three to four people aged between 20 and 35. More than that would be too stressful, and end up too much like a hospital.

There would be a spare bedroom for when a housemate needs a little support, and two bathrooms. “Everything takes longer when you’re ill,” she admitted. Having the space to settle in and have your own room is, Kaub thinks, important in reducing stress during treatment.

“Younger cancer sufferers also have very age-specific problems,” she said, adding that almost all the young people she met during her time in hospital had had to move home. “Many said they had no idea where they fit in, they weren’t in strong enough relationships to stay with a partner but felt too old to be back at home.”

Kaub asked 25 young patients during her time in and out of hospital, two weeks of every month were spent there for a year, about whether they would be interested in living somewhere like a Chemo WG. “More than half said they would, and almost all said they had had to move back in with their parents after falling ill.”

“Obviously for some people, being at home is the better option though,” said Kaub, a sociology student at university in Darmstadt south of Frankfurt.

But assisted living, no matter how basic, is not cheap, and Kaub has been trying since February to set up a foundation that would collect funding for the flat. So far, getting enough people to make up a directory board was, she said, proving tough.

“A lot of people think it’s a really good idea but when push comes to shove they just don’t have time to commit,” Kaub admitted, adding that raising awareness was key in finding people willing to give time to setting up the WG. Rent would be paid for by those living there, and the foundation would figure out how to pay for services like cleaning, food delivery and cooking.

She said she would be approaching the state government to tell them her plan and ask for funding. Although she is “not looking forward to getting tied up in Germany’s complicated bureaucratic system.” A good sign was, Kaub added, that the head doctor the Koblenz hospital where she received treatment is very enthusiastic about the idea.

The Chemo WG foundation’s job would be to find the flat, fit it out appropriately. “I was thinking about asking Ikea to donate furniture,” said Kaub, and sort out the day-to-day services the housemates might need. “The main advantage would be, unlike a hospital, there would be privacy and space for independence on better days,” she added.

Until things get underway, Kaub will be cycling from one end of Germany to the other – both as a victory gesture about beating a vicious type of cancer, and to raise awareness about the Chemo WG. She will be getting into her three wheeled recliner bike on July 1st in at Lake Constance in the south and cycling 2,000 miles to the Germany’s Baltic coast.

“I was in a wheelchair for a long time, and at one point it looked like I would lose my leg,” said Kaub, explaining that the trip would be her reward after a year of pain. Along the way, she will be stopping off at alternative housing associations to get inspiration for her own unique accommodation proposal.

EXPLAINED: How to get the flu vaccine in Norway