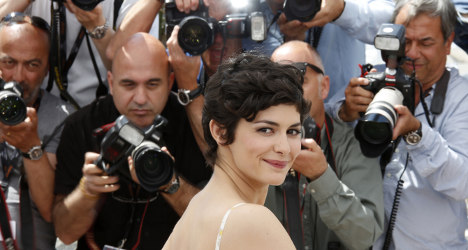 The Coen Brothers, Roman Polanski and Steven Soderbergh return to the Cannes Film Festival from Wednesday, with a string of younger talents snapping at their heels in the race for the coveted Palme d'Or.

CLICK HERE for a gallery of the hottest French film stars to spot at Cannes.

Baz Luhrmann's take on "The Great Gatsby" starring Leonardo DiCaprio and Carey Mulligan, will lay on the glitz when it opens the 12-day fest on Wednesday evening.

"Gatsby" is not in the quest for the Palme, but behind the razzmatazz of its European premiere, Luhrmann is under pressure to deliver F. Scott Fitzgerald's Roaring Twenties classic to a new generation.

The Australian director's $100 million extravaganza has been filmed in 3D and is scored by rapper Jay-Z, with tracks from Beyonce, will.i.am and Emeli Sande.

The brash formula has gone down poorly with some reviewers in the US, although others said they liked the eye candy.

In one of the most keenly-awaited films in competition, Douglas plays the flamboyant entertainer Liberace, who never disclosed that he was gay during his lifetime, in Soderbergh's biopic "Behind the Candelabra".

The film is apt in a watershed year for gay rights, with more and more states granting gay people the right to marry or adopt.

It could also be something of a swansong for Soderbergh, who has threatened to retire.

The 50-year-old director and screenwriter, who shot to prominence after winning the Palme d'Or in 1989 with "Sex, Lies, and Videotape," has complained that Hollywood studios refused to fund the new feature as it was "too gay".

In the end, it was financed by US payTV, where it will be commercially screened.

The Coen Brothers, last in competition in Cannes in 2007 with "No Country for Old Men", have made the official selection this year with "Inside Llewyn Davis", the story of a singer-songwriter set against the 1960s New York folk scene.

The film is the second appearance at Cannes this year for Mulligan. The elfin-faced 27-year-old Briton ignored early advice to forget acting and "marry a banker" instead. She went on to earn a best actress Oscar nomination before she was 25.

There will also be a special screening of an updated version of "Weekend of a Champion", Polanski and Frank Simon's 1971 film on Formula One racing driver Jackie Stewart as he attempted to win the Monaco Grand Prix.

In another documentary special screening, Stephen Frears' "Muhammad Ali's Greatest Fight" will recount the boxer's battle to refuse the draft as a conscientious objector.

Like "Drive" it is expected to shock for its violence, this time set in Bangkok gangland and filmed on location in Thailand.

Other films to watch include Asghar Farhadi's "Le Passe", following his best foreign language film Oscar for "A Separation" in 2012 and Jim Jarmusch's vampire romance, "Only Lovers Left Alive".

Japan has two films in the race for the Palme d'Or including "Soshite Chichi Ni Naru" ("Like Father, Like Son") by Hirokazu Kore-Eda, one of his country's leading filmmakers known for his sensitive portrayals of contemporary life.

From China there will be "Tian Zhu Ding" ("A Touch of Sin") by former underground filmmaker Jia Zhangke.

US critic John Powers has predicted Jia's films will still be of interest 100 years from now for his "sustained effort to capture the precise moments when China's past is being tossed on the ash heap of history".

The only woman director competing for the Palme d'Or will be Valeria Bruni-Tedeschi, sister of former French first lady Carla Bruni-Sarkozy, with "Un Chateau en Italie".

Women are better represented in the parallel new talent section Un Certain Regard which will be opened by Sofia Coppola's "The Bling Ring".

The film is inspired by a true story of a group of adolescents who rob the homes of celebrities after becoming obsessed with the world of "beautiful
people".

Following controversy last year, organisers tried to head off any criticism of the number of women directors nominated saying Bruni-Tedeschi's film had been selected because it was a good film not because it was made by a woman.