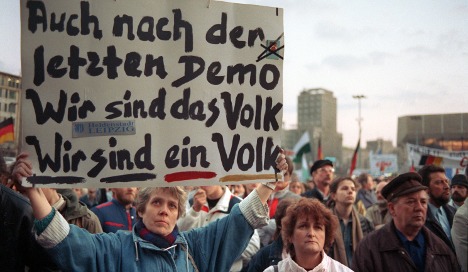 The group, led by Hans Müller and Wilfried-Hassan Siebert, secured the name Wir sind das Volk – “We are the people” – at the Munich patent and trademark office, the Leipziger Volkszeitung reported.

The slogan is famous across Germany after being used by demonstrators in 1989 who undermined the authority of the socialist East German regime, defying them with demonstrations which grew in size Monday after Monday.

The “We are the people” phrase came to represent the entire concept of reclaiming the authority of acting on behalf of the population from the government that had lost all legitimacy to do so.

Until now rights over the phrase had been held by the city of Leipzig where many of the most important Monday demonstrations were held. But the city lost those rights just a few weeks ago, the newspaper said.

Now Müller and Siebert, from Schleswig-Holstein, have claimed the phrase for their party which supposedly wants to stop what they say is the continued occupation of Germany – and to stop all immigration to the country.

Leipzig is considering a legal challenge to the party’s claim on the phrase and has until the start of June to do so.