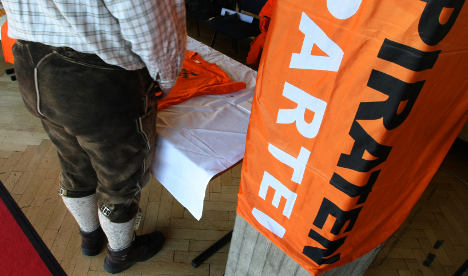 One major decision was to adopt a call for the possession of cannabis to be decriminalized in the conservative southern state, the Süddeutsche Zeitung newspaper reported. The conference was held in Gemünden am Main ahead of Bavarian state elections on 15th September.

“It cannot be, that every year we invite thousands of tourists to the [Oktoberfest] Wiesn, who then lie puking in the corner, but at the same time, remove someone’s driving license just because he smokes a joint once in a while, even if he would never drive high,” said Florian Deissenrieder, a 29-year-old Pirate candidate for the state parliament.

Rather than punishment, the party has called for drug education in schools. It adopted a similar approach to hard drugs, calling for facilities to be provided so that injecting addicts have a safe and clean place to take their drugs. “It is good if the people could be offered clean needles and counselling as well,” said Deissenrieder.

The party also wants to ban all advertising for alcohol and tobacco, although would push for a relaxation of Bavaria’s smoking ban.

Education policies were a central part of the party’s manifesto, with calls for a more flexible school system to better recognize students’ individual abilities. The current system where a student must repeat a school year if he or she has failed in a subject regardless of marks in other subject was too inflexible, the party said.

“The kids are looking at it anyhow, and if they have questions for the teachers, they cannot be answered if the teachers haven’t been allowed to look at the stuff with the students.”

She said pornography should be tackled in school so that students can be made aware of how the videos are made, why they are made the way they are – and that they do not portray reality.

But teachers might not be the right people to discuss this with students – and external advisors should instead be sent into schools to handle this part of the syllabus, said Lorenz.

The Bavarian Pirate Party currently scores around three percent in opinion polls – not enough to clear the five-percent hurdle for entry into the state parliament. But Bavarian Pirate leader Stefan Körner said he was hopeful of clearing that hurdle in the actual election.