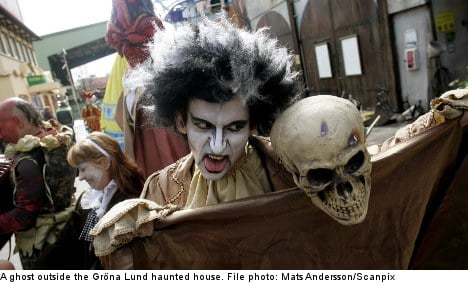 “One of my colleagues who was really short played a child ghost, but her dress and the bloody teddy bear she held in her arms really set some people off,” Alexander, who worked at Gröna Lund for four summers in the early 2000s, told The Local.

“She had to put up with people groping her breasts.”

He himself escaped the worst of the abuse but said he would on occasion be hit by people, often in the stomach. Yet Alexander said he did not think lashing out was a normal reaction to being scared in the haunted house.

“Sure, maybe they were scared, but it’s not a normal reflex to hit someone. I’d say it was more about impressing their friends,” the former ghost said.

“Or they were just messing with us and wanted to go home and brag about punching a ghost.”

Alexander said staff would retreat into the hidden passageways in each room of the haunted mansion if they ever felt threatened. Weekends were the worst, when hordes of drunken visitors would spill in. He said couples having sex behind the curtains was not unheard of, nor was visitors urinating on the floor.

“If we called the security guards and told them it was urgent they were pretty good at showing up quickly, but management did not listen to us,” Alexander recalled.

“They never reported the incidents to the police. If something really bad happened, they would at most let you take the rest of the day off.”

Alexander said he personally did not feel unsafe, as he escaped the worst abuse, but said the situation was a source of irritation, and became a problem when management did not take it seriously.

“It’s so easy not to take it seriously when you employ young people who don’t know their rights,” he said.

The abuse stretched on for at least a decade, said current and former workers at the theme park’s haunted house who spoke with the Dagens Nyheter (DN) newspaper on Friday.

DN’s review showed that in 2002, seven of twelve incidents reported to police took place in the haunted house, where a team of eight of Gröna Lund’s army of seasonal employees worked.

However, only two of the incidents were ever reported to workplace safety officials, despite requirements in Swedish labour law that employers report all incidents involving threats and violence at the workplace.

Alexander’s group of ghosts was the last group of non-professional artists to don the ghost garb before Gröna Lund in 2004 hired artists from the Brazilian performance group Up Leon to take over.

“We very much felt we were replaced because we had started to kick up a fuss,” Alexander told The Local.

For the ensuing three years, no reports of abuse reached Gröna Lund management.

“They are very thankful for the jobs they had and didn’t want to seem ‘whiny’,” Johan Lindgren of Gröna Lund told DN. He added that the Brazilian workers had a “higher threshold” for tolerating abuse in comparison to the Swedish seasonal workers hired by the park in the past.

Malin Ackholt of the Swedish Hotel & Restaurant Workers’ Union (HRF) told the newspaper it was “unacceptable” that the Brazilian workers did not feel they could address workplace safety issues with their employer.

“It’s incredibly frightening that they didn’t dare take up these problems with their employer. That’s extremely dangerous,” she told the TT news agency. “That’s not a labour market that is suited for Sweden or anywhere else in 2013.”

Gröna Lund’s current spokeswoman Annika Troselius said that Lindgren has since expressed regret over his statements.

“The difference is that (the Brazilians) are trained artists; they are incredibly skilled at reading guests and making appropriate adjustments to how they scare people,” she told TT.

Troselius nevertheless admitted that the park had failed to handle the situation appropriately, but claimed that it was very rare for guests to act out of malice against the ghosts and in most cases the frightened guests were simply acting instinctively, something that former ghost Alexander said was a simplistic analysis.

“We’ve since clarified our procedures to ensure it doesn’t happen again,” Troselius added.

In addition, Gröna Lund has taken several steps to increase safety for workers in the haunted house, such as equipping them with radios and placing them behind barriers when they scare visitors.

Founded in 1883, Gröna Lund is situated on a compact 15-acre site on the island of Djurgården in central Stockholm. The park sees around 1.2 million visitors per year and is set to open for the 2013 season on April 27th. 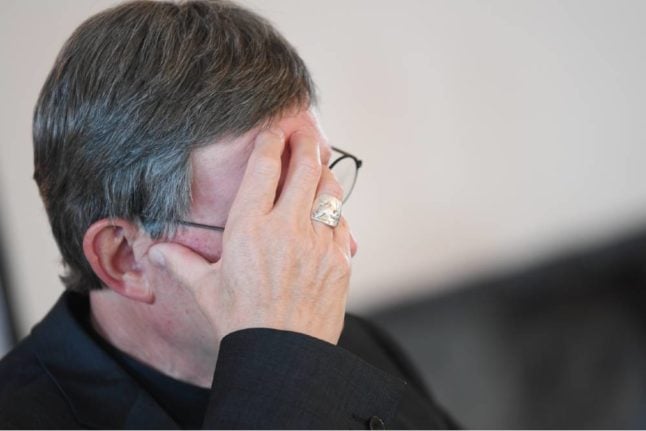 In a rare public rebuke, the diocese council of the western city of Cologne, which groups clergy and laypeople, sharply criticised Archbishop Rainer Maria Woelki, saying he had “completely failed as a moral authority”.

“We find ourselves in the biggest crisis that the Church has ever experienced,” Tim Kurzbach, head of the council, said in a statement.

“Those responsible must finally also take responsibility. We need clarity now. Otherwise we have no chance of getting out of this misery.”

Woelki, a conservative who has resisted Church reform efforts, has faced criticism for months for refusing to allow the publication of an independent study on abuse committed by clergy in his diocese, the country's largest, between 1975 and 2018.

Victims have expressed anger and disappointment about his stance.

Woelki has justified his decision by citing a right to privacy of the alleged perpetrators accused in the report, carried out by a Munich law firm, and what he called a lack of independence on the part of some researchers.

In early November, the diocese of the western city of Aachen published its own study prepared by the same law firm.

A study commissioned by the German Bishops' Conference and released in 2018 showed that 1,670 clergymen had committed some form of sexual attack against 3,677 minors, mostly boys, between 1946 and 2014.

However its authors said the actual number of victims was almost certainly much higher.

The revelations, which mirror paedophile scandals in Australia, Chile, France, Ireland and the United States, prompted Cardinal Reinhard Marx, a prominent reformer, to apologise on behalf of the German Catholic Church.

The Church currently pays victims an average sum of 5,000 euros ($6,067) “in recognition of their suffering”, as well as covering their therapy fees.

In September 2020, German bishops agreed that victims would be entitled to payouts of up to €50,000 each and an independent committee would be set up to examine complaints and decide on payouts from January 1st, 2021.