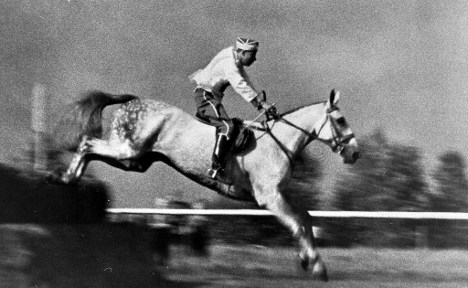 Yet the German state no longer owns the rights to one of the most famous films ever to come out of the country, wrote Die Welt newspaper on Monday. They were secretly sold off to the International Olympic Committee (IOC) by former Chancellor Gerhard Schröder’s government a decade ago, according to the paper.

In allowing the sale of the influential – and controversial – film back in 2002, Schröder believed he was helping Leipzig’s chances in its bid to host the 2012 Summer Games. However, the sale made no difference – the eastern city never even made the top five candidates.

German director Leni Riefenstahl is renowned for her 1934 propaganda epic “Triumph of the Will” in which she shows Hitler wielding absolute power over his party at the National Socialist conference in Nuremberg. Yet she has always claimed total artistic independence from the regime and exclusive ownership of the rights to her films.

But the German Federal Archive always said the two high-budget epics had been commissioned and financed by the Nazi regime and so the usage rights were the rightful property of the modern German state.

In 1964, West Germany drew up a contract with Riefenstahl, which agreed that while both parties claimed exclusive ownership of the films, the director was to hold the usage rights and claim 70 percent of the royalties from them.

Riefenstahl was also allowed to choose where and when her films were screened – a potentially politically-explosive responsibility the West German state decided it could do without. In 1979 she refused an application by the Free Democrats (FDP) to screen “Triumph” at an anti-Nazi rally.

Then suddenly in 2002, wrote the paper, the German government got wind of attempt by the now 100-year-old director to sell the “Olympia” film rights to the IOC, who had pledged to gain and restore Olympic feature films.

The problem of Riefenstahl selling partial state property was taken all the way up to then Chancellor Gerhard Schröder, said Die Welt. Schröder agreed to the sale – mainly because he mistakenly thought it might sway Olympic Committee into granting Leipzig the games.

The film, of which there are countless edited versions in three languages, has been as controversial as it was successful. After the war, Riefenstahl fell out of favour and the film’s images of Hitler, Hermann Göring and Joseph Goebbels and the glorification of perfect Aryan bodies all left an unpleasant taste.

A post-war edit removed most of the footage of Hitler and this version was screened West Germany and in US cinemas. The film went on to win many international prizes for its ground-breaking use of advanced cinematic techniques, and appears on Time magazine’s top 100 films of all time.