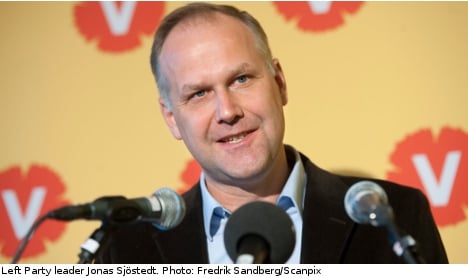 The Left Party are the main winners in the new Sifo poll published on Sunday, climbing 1.6 percentage points to 7 percent in the only statistically significant change.

The Social Democrats dropped slightly, down 0.6 points on the previous month’s poll to 34.4 percent and the Green Party were down 0.4 points to 8.9 percent

The four governing Alliance parties gathered 40.4 percent in the poll, a drop of 9 percentage points on the 2010 election result.

The Moderates climbed slightly, by 0.6 percentage points to 27.9 percent, while the Centre Party and Liberal Party (Folkpartiet) dropped 0.3 points and 0.2 points to 3.5 percent and 5.4 percent respectively.

The Christian Democrats climbed marginally, by 0.3 points to 3.6 percent.

The result indicates that both the Christian Democrats and the Centre Party would fail to accumulate enough votes to come in above the 4 percent threshold for parliamentary seats.

The Sifo poll was conducted between April 2nd-11th with 1,923 people interviewed.