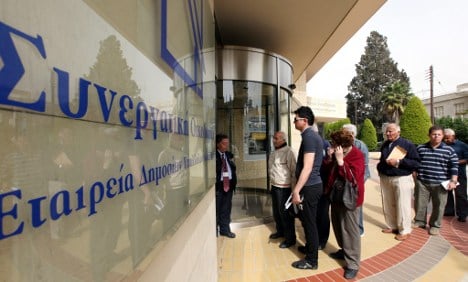 “The contribution from international creditors will not change,” government spokesman Steffen Seibert told a regular briefing, noting that the €10 billion ($13 billion) package was “already very large”.

Cypriot President Nicos Anastasiades said Friday he would appeal to EU chiefs for more help, a day after it emerged that the total cost of its EU-IMF bailout has surged to €23 billion from €17.5 billion previously.

That means Cyprus will now have to find €6.0 billion more than the €7.0 billion mooted in a preliminary agreement reached on March 25 in order to secure an EU-IMF contribution of €10 billion.

Anastasiades said he had already spoken to European Union Economy and Euro Commissioner Olli Rehn ahead of a key meeting of eurozone finance ministers in Dublin later Friday that is due to finalise the bailout terms.

He said he would also write to European Commission chief Jose Manuel Barroso and to EU President Herman Van Rompuy but did not specify what additional support he was seeking.

task force to lessen the burden of measures agreed in exchange for loans.

“The rate change applies from tomorrow, September 23rd 2022”, SNB said in a press release on Thursday.

It added that “inflation [in Switzerland] rose to 3.5 percent in August and is likely to remain at an elevated level for the time being”.

The latest rise in inflation is principally due to higher prices for goods, especially energy and food, according to the bank.

The SNB’s forecast for the evolution of inflation is, however, positive.

“Without today’s SNB policy rate increase, the inflation forecast would be significantly higher”, the bank said.

In mid-June, the SNB tightened interest rates by half a percentage point for the first time in 15  years. Since then, inflation in Switzerland has continued to rise. For August 2022, the statisticians reported inflation of 3.5 percent, after 3.4 percent in June and July.