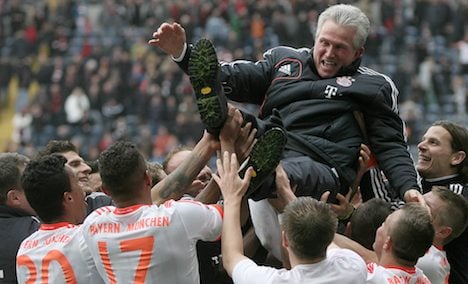 Bayern Munich set the record for the earliest Bundesliga title win on Saturday when they were confirmed as German champions for the 23rd time.

Germany star Bastian Schweinsteiger scored the decisive goal at Eintracht Frankfurt to give Bayern their 24th win from 28 league games this season and seal their first major silverware since May 2010.

“We’re a strong team with a great coach, it’s fantastic to have won the title,” said Schweinsteiger.

Victory at Eintracht Frankfurt on Saturday saw Bayern better their own record from 1972-73 and 2002-03, when they won the title with 30 out of 34 matches played.

“The fact that we have won the title after 28 games is extraordinary, it’s simply fantastic,” said coach outgoing coach Jupp Heynckes, having been hoisted into the air by his team after the final whistle.

“0ne of the things FC Bayern have demonstrated this season is that we’re a top side, but we have done it with harmony in the team.”

This season they have already set the record for the most consecutive wins at the start of the season — after winning their first eight matches — and the fewest goals conceded after 21 matches.

More records have either been broken or are set to follow, with Bayern having won the Bundesliga for the 22nd time since the modern national league started in 1963.

Having accrued 75 points with six games left, they are on course to smash Dortmund’s record of 81 points in a Bundesliga season, set just a year ago.

“I have no problem congratulating Bayern, they have had an outstanding season,” said Dortmund midfielder Nuri Sahin.

“I don’t begrudge Heynckes the title at all,” said Veh, whose team remain fifth in the league for now. “For me, he is a great role model and I hope that Bayern win more titles.”

Undefeated away from home in the league this season, they are set to equal their own record from the 1986-87 season, when they went through an entire Bundesliga campaign without losing on the road.

With 13 wins on their travels, they have claimed the record for the most away wins and, having conceded just 13 goals all season, ‘keeper Manuel Neuer is set to break Oliver Kahn’s record of letting in just 21 goals in the 2007-08 season.

Having secured their 24th win of the season at Frankfurt, Bayern are also just one short of the record tally, held by both Borussia Dortmund in 2011-12 and Bayern in 1972-73, of 25 wins in a season.

Helped by their 9-2 hammering of Hamburg at home last Saturday, they boast a goal difference of 66, two better than the 64 set by Gerd Müller’s Bayern in the 1972-73 season.

But the biggest record of all is the one Bayern covet most: to become the first German team to win the treble of Champions League, domestic league and cup.

They head to Turin on Wednesday for the Champions League quarter-final, second leg against Juventus, with a 2-0 goal lead after Tuesday’s first leg in Munich.