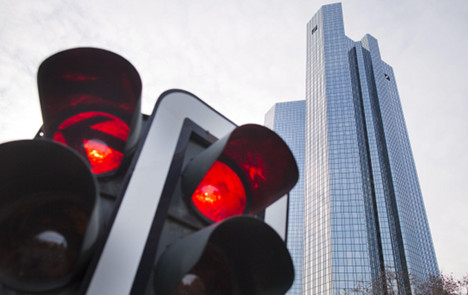 According to the Financial Times, the Bundesbank has launched a probe against Germany’s biggest lender concerning the accusations dating back to 2011.

The newspaper alleged that three former Deutsche Bank employees told US regulators, the SEC, that the bank had used improper accounting to misrepresent as much as $12 billion (€9.3 billion) in losses on credit derivatives during the financial crisis between 2007 and 2009.

Deutsche Bank – which liked to present itself as one of the few German banks to weather the crisis – hid the losses so as to avoid a government bailout, said the FT.

The Bundesbank said it always examines allegations of wrongdoing by Germany’s banks, but could not provide information about individual investigations.

“But in principle it is true to say that the central bank looks into whether any accusations are valid,” she said.

Deutsche Bank has always denied the allegations, issuing a statement on Thursday dismissing the report as “wholly unfounded”.

It said the allegations were “more than two and a half years old” and had been widely reported in June 2011.

“The investigation also revealed that the allegations stem from people without responsibility for, or personal knowledge of, key facts and information,” it added.

Deutsche Bank has said it had properly valued and accounted for its trading on the credit derivatives in question and the positions had since been unwound in an orderly fashion.

The September 2021 murder in the western town of Idar-Oberstein shocked Germany, which saw a vocal anti-mask and anti-vaccine movement emerge in response to the government’s coronavirus restrictions.

The row started when 20-year-old student worker Alex W. asked the man to put on a mask inside the shop, as required in all German stores at the time.

After a brief argument, the man left.

The perpetrator – identified only as Mario N. – returned about an hour and a half later, this time wearing a mask. But as he bought his six-pack of beer to the till, he took off his mask and another argument ensued.

He then pulled out a revolver and shot the cashier in the head point-blank.

On Tuesday, the district court in Bad-Kreuznach convicted Mario N. of murder and unlawful possession of a firearm, and handed him a life sentence.

Under German law, people given a life sentence can usually seek parole after 15 years. His defence team had sought a sentence of manslaughter, rather than murder.

At the start of the trial, prosecutor Nicole Frohn told how Mario N. had felt increasingly angry about the measures imposed to curb the pandemic, seeing them as an infringement on his rights.

“Since he knew he couldn’t reach the politicians responsible, he decided to kill him (Alex W.),” she said.

Mario N. turned himself in to police the day after the shooting.

German has relaxed most of its coronavirus rules, although masks are still required in some settings, such as public transport.