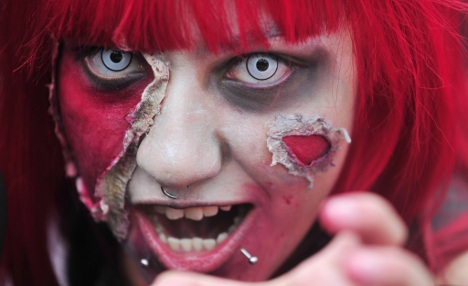 Everyone who’s ever seen a zombie film knows the government is never able to contain an onslaught of the undead.

The powers-that-be invariably act too late, leaving pockets of isolated survivors to fend for themselves as the brain-munching pandemic spreads across the world, laying waste to civilization in its wake.

But after all, forewarned is forearmed. So how would authorities react if hordes of hungry monsters flooded Berlin’s city streets? Christopher Lauer, head of the Pirate Party’s parliamentary fraction, recently put the question to the Berlin city government.

Lauer wanted to know if city politicians would be producing the kind of comic-style handbook published recently by authorities in the US, preparing citizens for emergencies using the scenario of a zombie attack. “And if not, why not?” wrote Lauer.

In her dry and factual response, Emine Demirbüken-Wegner from the ministry in charge of emergency preparedness, referred Lauer to the government’s existing emergency guidelines, wrote Die Welt this week.

Meanwhile, wrote Demirbüken-Wegner, a zombie apocalypse survival handbook would be an inappropriate vessel for citizens’ advice on “the very important theme” of emergency preparedness.

As there appeared to be no specific plan to combat a zombie invasion, Berlin’s authorities may yet risk being mobbed by a “mass shamble” of citizens in full zombie get-up.

Leicester city council in the UK suffered just that fate in 2011 after an FOI request by a concerned citizen forced the local council to admit it had no emergency plans in place should the undead rise.