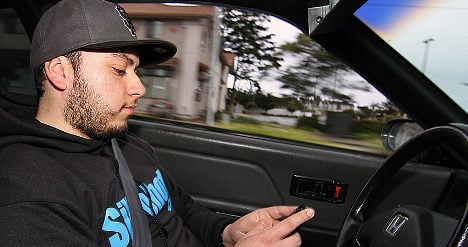 The lucky participants in the international study first had  to drink their way to different blood alcohol content levels and then zoom along at speeds of between 60kph and 80kph — although only in a computer-simulated fashion.

A level of over 0.05 is illegal in both Spain and Australia.

"The study was carried out in Australia and the volunteers — all with driving licences — had to 'drive' a virtual car," explained Sumie Leung Shuk Ma, coauthor of the study and an investigator at the University of Barcelona.

"They had to keep the vehicle in the centre of the left lane and then break every time a truck appeared on the screen," Ma told Spain's Science Information Service (SINC).

With the higher alcohol levels (0.7 and 0.10 grams a litre), the drivers drove faster and took longer to brake.

The researchers from University of Barcelona and Australia's Swinburne Institute, among others, then compared the effects of drunk driving and mobile phone use at the wheel.

They did this first by speaking to the volunteer subjects while they were 'driving' about interesting but trivial themes like their hobbies.

This was then followed up with a more demanding conversation such as asking subjects to describe their route home by car or listing the names of friends which began with a vowel.

During the simpler conversation, driving reaction times were the similar to a blood alcohol reading of 0.4, or just below the legal limit.

For the more difficult dialogues, however, these reactions were akin to someone with blood alcohol content of 0.7

"Our results show that the use of hands-free devices can also be a major risk for drivers. Although their use should be allowed, we need further study to establish rules for their use," said Ma.

"National authorities need to look very closely at the pros and cons,"  added the investigator.

New figures released by the European Commission on Tuesday reveal that deaths on Spanish roads were down 9 percent in 2012.