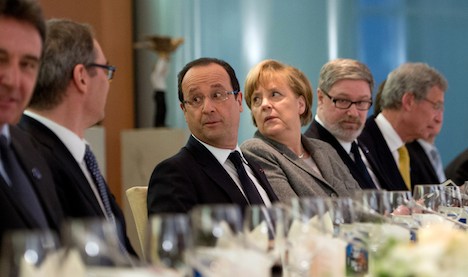 “We need to create a Europe that has growth, a Europe that has solid public finances, that inspires people with hope, that creates jobs for its people,” German Chancellor Angela Merkel said at a joint news conference.

“We especially need to create a Europe that is competitive, because if we don’t do that, all of these other points will not come to pass,” said Merkel ahead of a meeting with top business representatives.

For his part, French President Francois Hollande said European leaders had already done “quite a lot” to stabilise the eurozone economy and that the priority now was to create growth in the recession-wracked zone.

While the eurozone economy is “already a very strong economy … we need to be better in order to face global competition. In order to do that, we need to co-ordinate more,” said the president.

European Commission President Jose Manuel Barroso acknowledged the crisis was still not conquered, “as you can see from the dire growth prospects, record levels of youth unemployment and also the most recent developments concerning Cyprus.”

However, he said that “thanks to decisions taken together over the past years, confidence is gradually returning.”

He acknowledged the path to greater financial health would be “bumpy” but urged EU countries to stick to structural reforms and budgetary consolidation.

“I am convinced we need to hold our nerve and stay the course,” stressed the EU leader.

The trio studiously avoided direct references to the crisis in Cyprus where banks were set to be closed until at least Thursday amid public outcry over the terms of an EU bailout that demanded a one-off tax on people with money in Cypriot banks.

Sources close to Hollande said Barroso “had wished not to tackle the subject of Cyprus directly.”

“It wasn’t the place to make comments about that,” added this source.

Eurozone finance ministers, who along with the International Monetary Fund demanded the deeply unpopular levy, held new talks by videoconference later on Monday to review the deal. They agreed to give Cyprus the leeway to shield small savers from the charge.

PARTNER CONTENT
Moving to France – how to zap the culture shock