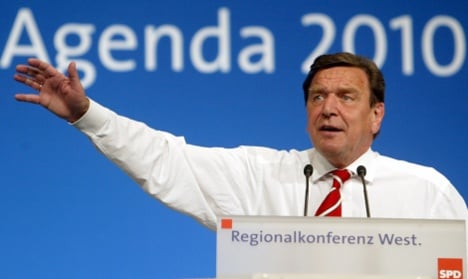 Schröder sketched out his reforms to lawmakers on March 14th, 2003, proposing swingeing cuts to unemployment benefits in an attempt to cure the country The Economist magazine had dubbed “the sick man of Europe.”

“Overhauling and renewing the welfare state has become unavoidable,” Schröder told parliament at the time. “It’s not about killing it off, rather solely retaining the substance of the welfare state. Therefore we need fundamental change.”

This drew the wrath of a section of his party, as well as its traditional allies, the trade unions – 130,000 members left the party between 2003 and 2008 and the SPD’s performance in elections weakened. The unreformed socialist party The Left, also prospered from dissatisfaction with the SPD.

Yet ten years later Europe’s top economy is one of the continent’s most prosperous. Its jobless rate of 6.8 percent last year made it the envy of its neighbours, while most economists and even the centre-right have acknowledged that Agenda 2010 reforms have played a part in this success.

“I don’t contest the role played by Agenda 2010 for growth,” Rainer Brüderle, the main candidate for the pro-business Free Democratic Party (FDP) in September’s federal elections, said last week. But, he added ironically: “Today, the SPD wants nothing more to do with the Agenda.”

While Walther said he would not go that far, he said there existed “this contradiction” within the party, which in an election year complicates things for the SPD’s candidate to replace Chancellor Angela Merkel, Peer Steinbrück.

On the one hand the party feels great pride for having initiated the reforms which have borne fruit. Without them “we would be alongside Italy, France or Spain, facing clearly bigger problems”, the leader of the SPD’s parliamentary group Frank-Walter Steinmeier, said on Monday.

But on the other hand there remains a lingering feeling of having betrayed the traditional party faithful. “They say they ended a downward spiral [for Germany’s economy] but for many it was just beginning,” former trade unionist Wolfgang Denia, an SPD party member, said, denouncing Schröder’s reforms for having hit party voters from the working and middle classes.

Under Agenda 2010, long-term unemployment benefits were rolled together with welfare under the now-hated Hartz IV system which sets out in detail what a recipient is allowed to have and spend their money on. The jobless are also forced to take work that is offered to them or risk seeing their benefits cut, while low salaries have become more commonplace with around one worker out of 10 toiling for less than €8.50 ($11.06) an hour.

A poll released this week by Stern magazine showed Germans deeply divided over the legacy of Schröder’s Agenda 2010. While 44 percent said the reforms had been good for the country, 43 percent believed that Hartz IV in particular had had a negative effect.

An electoral drubbing in 2009, when the SPD garnered less than a quarter of the votes, led to the party re-examining some of its policies, and today it acknowledges that the reforms had certain harmful effects and plans to remedy them.

Unveiling its manifesto for the September 22 elections under the title ‘For A New Social Balance In Our Country’, the SPD did not touch on the principles of its 2003 reforms but said it wanted to regulate temporary work, introduce a minimum wage and increases taxes for the wealthiest.

“We’ve reviewed everything,” Cansel Kiziltepe, an SPD candidate in a Berlin constituency for the elections, told AFP. “But the problem of credibility is still there. As long as we don’t say clearly ‘it was a mistake’, we will not be credible,” she said.

The SPD currently is polling at around 26 percent, according to a recent survey compared to 40 percent for Merkel’s conservatives.

Schröder, visiting the SPD parliamentary group this week for the first time since leaving office, said he could understand the need to temper some of the effects of his reforms.

“If the basic principles of the Agenda – to support and demand more from people – remain intact, I’d be the last one to have something against that,” he said, adding that his legacy should not be confused with the Ten Commandments.