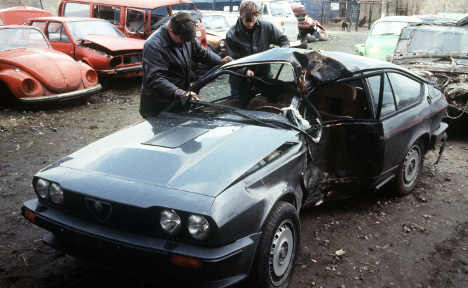 On March 7 1983, Eigendorf died aged just 26 in hospital from his injuries two days after crashing his sports car into a tree while driving home on a wet night following an evening at his local pub in Braunschweig, near Hannover.

Dubbed the “Beckenbauer of the East” during his short career, in reference to West German legend Franz Beckenbauer who captained and coached his country to World Cup titles.

Suspicion still surrounds the accident, with many pointing the finger at the former East Germany’s secret police – the Stasi – as Eigendorf had fled the regime in 1979 after his team Dynamo Berlin played a friendly game in West Germany.

Before defecting, he made six appearances for East Germany, scoring three goals from midfield after making his international debut in 1978 while playing for Stasi-run team Dynamo.

In the west, he went on to make more than 50 Bundesliga appearances over two seasons before joining Eintracht Braunschweig in 1982.

On the night of the accident, extremely high levels of alcohol were found in his blood and they were blamed for the crash which killed him.

“It wasn’t his manner to drink too much,” insisted his widow Josephine, his second wife, while several eye-witnesses in the bar claimed he had drunk only a few small beers.

No autopsy was performed and the scene of the crash was never investigated forensically – only a car expert examined the vehicle.

Claims that the car’s brakes were tampered with or that shots hit the windscreen and front tyres before the crash were neither substantiated nor dismissed by a hasty police investigation.

Rumours quickly circulated, and still persist, that the Ministry of State Security was involved in Eigendorf’s death because the head of the Stasi, Erich Mielke, never forgave the high-profile star for defecting.

“Remember Eigendorf,” is said to have been Mielke’s favourite phrase whenever he wanted to motivate Stasi agents.

Such was their interest in Eigendorf that a secret service agent befriended and later married his first wife Gabi, who had been left behind in East Germany along with their two-year-old daughter.

In a television documentary, journalist Herbert Swan presented evidence which he claimed showed that Eigendorf was poisoned with a cocktail of alcohol and drugs.

Only after Germany’s reunification in 1990 did the uncovering of Stasi documents show the lengths the secret service had gone to keep an eye on Eigendorf, who was seen as a traitor in the east.

Stasi records show in the four years before his death, some 50 agents were sent to the west to monitor and report back on his movements.

“Lutz was constantly afraid of being kidnapped back to the east,” revealed Josephine.

In 2010, former Stasi agent Karl-Heinz Felgner testified before the District Court in Düsseldorf that he had received a contract to murder Eigendorf, but it was never carried out.

“I am convinced that he was murdered by the secret police,” insisted Thines.

Despite the tragedy happening three decades ago, new evidence could yet come to light – there are still 15,000 sacks full of shredded Stasi documents being shifted through by experts looking to shed new light on the dark deeds carried out by agents during the Cold War.