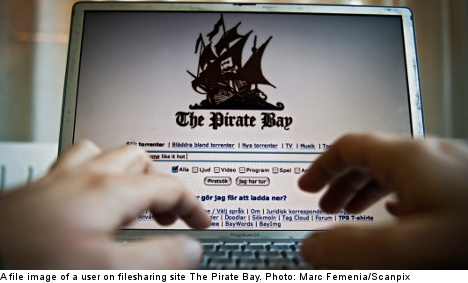 The party has instead decided to provide The Pirate Bay with internet access via servers belonging to Pirate Party chapters in Norway and the Catalan region of Spain.

After considering how to respond to the lawsuit threat, the Pirate Party decided to stop allowing the popular filesharing site to use the party’s servers in Sweden.

“The reason is partly for survival and partly due to the personal pressure on individuals in the party,” Pirate Party head Anna Troberg told the Svenska Dagbladet newspaper (SvD).

“It’s a case of endurance when it comes to civil lawsuits, and it’s all about who has the most money.”

She pointed to the fact that the Rights Alliance has multinational corporations behind it, whereas the Pirate Party is simply “sponsored by young people”.

The Pirate Party, founded in Sweden in 2006 and advocating for an overhaul of copyright laws, has been serving as a host for The Pirate Bay since 2010 after the filesharing site’s previous hosts were served injunctions from several Hollywood movie studies.

Troberg said on Tuesday that while the first battle may be over, two more are set to begin.

“The Rights Alliance has succeeded in chopping off the head, but now two new heads are growing instead,” she told SvD, adding that there are more than 60 Pirate Party chapters around the world.

“It is extremely problematic that private companies dictate how we communicate with each other online,” she added.

Sara Lindbäck of the Rights Alliance claimed the letter was not politically motivated, rather sent in regards to the organizations’ online capacities.

“The Pirate Bay makes it difficult for rights holders to live off their own work, and internet providers are enabling them to continue,” she told SvD.