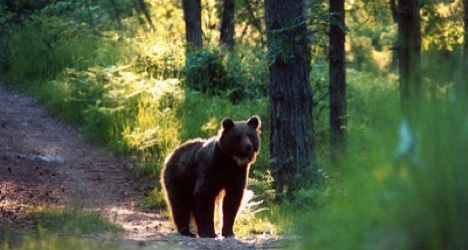 The bear in question — identified as M13 — interrupted his hibernation for a second time over the weekend when he frightened the wits out of a 14-year-old girl in the mountain community near the Italian border.

“He was only 10 metres from me,” the girl, identified as Emina Piana, told the local newspaper Il Bernina.

“I was super scared,” the girl said.

“I backed away from him slowly but he followed me.”

When she felt it safe to do so she ran to her home where she fainted.

Her worried parents sent the girl to hospital, where she was treated for shock.

Now, Piana is afraid to leave her home alone.

M13, meanwhile, also approached two tourists and wildlife officials are concerned because the brown bear appears to have no fear of humans.

After going into hibernation in mid-November, the animal was reported strolling around the Poschiavo region for several hours on February 9th before returning to his winter lair.

This follows various incidents involving M13 in residential neighbourhoods last year before he went into hibernation.

The bear broke into a shed next to a chalet in early November.

The bear has caused problems since last spring when he was anesthetized and tagged with a tracking transmitter after preying on a goat.

In September, the bear was caught eating sheep.

A month later the bear was discovered slurping down honey at an aviary outside a school.

“He no longer has respect for people,” said hunting inspector George Brosi, who is concerned about the bear’s behaviour.

“We are now in contact with the federal office of the environment to monitor the situation.”

The Poschiavo municipal council said it has been working with the office, the nearby town of Brusio, cantonal authorities and nature groups, such as Pro Natura and WWF Switzerland, on a plan to deal with the bear and others in the future.

The “Swiss philosophy of bear management needs to be more flexible to take greater account of the needs of the population affected by the presence of large predators,” the council said in a statement.

After being hunted to extinction, brown bears began to make a comeback in the country after they were reintroduced in a Trentino nature park in Italy.

Since 2005 there have been sightings of a handful of bears crossing the border into Switzerland.

The Valencian region’s Climate Emergency Department is planning to establish several Special Conservation Zones in popular natural spots in the eastern region, where climbing and canyoning will be prohibited and hiking will be limited.

If the new rule comes into force, it will affect a large portion of the province of Alicante, including popular retreats in nature such as the Barranc de l’Infern river and its hiking route, Puigcampana and Ponoig, one of the best-known climbing spots in the region.

So far, the project is just a proposal, but it has already angered mountain-sport lovers and businesses throughout the region.

Canyoning and climbing are considered “incompatible” practices with the preservation of natural habitats, according to the first draft of the new decree.

As well as banning these two popular sports, the new rule proposes that hiking in groups of more than 30 people will have to undergo prior evaluation.

The objective of the Department of Climatic Emergency is to extend this new rule and the creation of the ZECs to all the natural spaces included in the Natura 2000 Network within the Valencian Community.

The regulations of the European Union on these sites imply that they must guarantee the preservation of species of fauna and flora.

For example, in the Special Conservation Zone (known as a ZEC) de la Marina, the decree states that species such as otter, river crab and Cobitis paludica fish will be protected, while the mountains in the centre of Alicante, it’s Bonelli’s eagle, the trumpeter bullfinch and the eagle owl, which must be protected.

However, according to sources of Las Provincias news site, the European legislation does not prohibit climbing, canyoning and hiking from being carried out within them.

The new proposal has taken many groups by surprise as they were not told of the new proposal beforehand, and are unaware of what the economic and social implications will be.

The President of the Federation of Sports in the Mountains and Climbing in the Community (Muntanya i Escalada de la Comunitat) Carlos Ferrís, pointed out that “the preservation of the environment does not have to be incompatible with these sports” and said that the limitations are not justified by any scientific report.

Pedro Carrasco, manager of CV Activa, an association that brings together companies who target active tourism agreed, when he told Las Provincias: “They would have to do a detailed study of each and every place to assess the conditions. It cannot be based on intuition alone”.

These rural tourism businesses do however agree that there can be some limitations on the practice of these sports, but that they shouldn’t be prohibited year round.