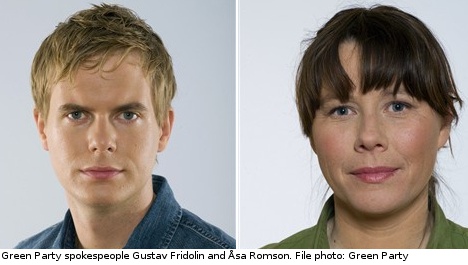 The Centre Party and the Christian Democrats meanwhile came in at 3.6 percent, below the 4 percent threshold for parliamentary seats and thus posing a potential threat to the governing Alliance coalition.

The Sweden Democrats declined for the second poll in a row, to 8.5 percent, which remains above their 5.7 percent showing at the 2008 general election.

Political scientist Jenny Madestam however played down the significance of the survey, coming some 18 months before Sweden goes to the polls.

“We have seen this before, that one longs for what one hasn’t got,” she said.

“The Green Party has also gained a stable position in Swedish politics. They are perceived as independent of both the government and the Social Democrats.”

Madestam however warned that the plight of the Centre Party and the Christian Democrats could pose problems for the government if their low ratings persist as the election nears.

“In part, it is a question of which of the parties to give a supporting vote, if you want a centre-right government, and in part there is a fear that tactical voting is a wasted vote when parties fall below the threshold.”

Madestam explained that the parties “have serious identity issues” among voters.

“Who are they? The voters don’t know.”

“The Centre party has tried to do something about this with their party programme, and that is the kind of work that needs to be done.”

Both the Social Democrats and the Moderates declined in the February poll – the former down 2.3 percentage points and the latter by 0.3.

The three red-green opposition parties have a combined total of 48 percent of voters against the four-party Alliance coalition’s 42.4 – a difference of 5.6 percentage points.

The Green Party’s rise is however the only statistically significant change.