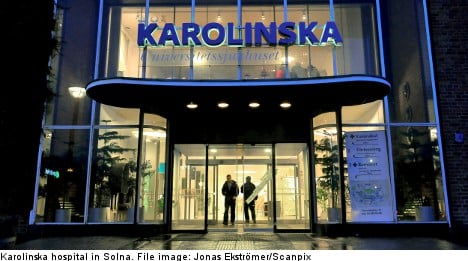 Both of Karolinska’s hospitals in Solna, north of the Swedish capital, and in Huddinge to the south, have been affected by the measure, which went into effect on Tuesday.

According to a statement on the hospital’s website, the unusual step was taken as a result of “an increase in cases of influenza and other viral infections” that has put extra pressure on Stockholm area hospitals already struggling with high patient volumes and minimal staff.

“That was the last drop, even though we’ve been under pressure previously,” Karolinska spokesman Klas Östman told the TT news agency.

As of Tuesday, the hospital has ordered that all planned operations and treatments that can be postponed without causing any medical risks be rescheduled.

The action may be “inconvenient”, Östman told the Expressen newspaper, but not dangerous.

The fact that nothing has been done to address the nursing shortage that has left Stockholm-area hospitals unable to cope with a spike in flu patients, angered opposition Social Democrats on the Stockholm County Council, the governing body for the public health system.

“The underlying problem is that this constant shortage means we can’t manage the peaks like we have right now,” Social Democrat Helene Hellmark Knutsson told Expressen.

She said promises by Stockholm health policy councillor Filippa Reinfeldt of the Moderate Party to expand emergency room services at local hospitals have come “too late”.

“It’s going to be at least five or six years before everything is in place and we need to take action now,” said Knutsson.