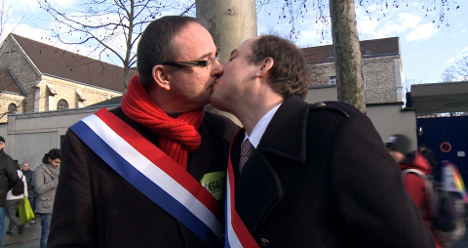 Among the tens of thousands of protestors who took to the streets of Paris on Sunday to support President François Hollande's planned legalization of gay marriage, two have stood out for their particularly bold gesture.

Yann Galut, 46, a National Assembly member for the Cher department in central France, and Nicolas Bays, 35, a member for Pas-de-Calais in the north, locked lips for a brief moment, to loud cheers from nearby demonstrators.

There have been widespread congratulations for the symbolic gesture, with one Twitter user typifying the enthusiastic support shown to the two married "stars of the day."

IN PICTURES: Check out more faces from Sunday's march for gay marriage