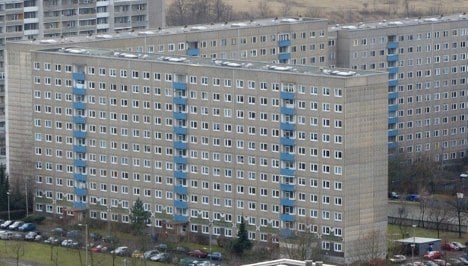 A block of flats in the Jena district where the lady lives. Photo: DPA

Ruth Kochan, 87, has not been able to leave her floor since the first week of November, when a fire in the elevator shaft effectively trapped her in the socialist-built tower block in Jena, Thuringia, Die Welt newspaper reported on Monday.

She uses a walker when she leaves the building, needing it for stability, support and to help carry shopping, the paper said, but she cannot possibly take it up and down eight flights of stairs.

“I’m trapped here, like in a bird’s nest,” she said, adding that she missed being able to get out.

Until November 6, she had made a point of leaving the house every day, even if only to the local supermarket, hair dresser or just for a walk.

But since the fire she has been trapped upstairs, dependent on friends and neighbours being kind enough to bring her shopping up the stairs.

Since her plight became known, she has even been visited by the mayor and television reporters, many of whom were asking about whose fault the problem could be.

Yet any blame would have to be laid at the feet of East German engineers who decided one lift was enough for the entire block.

Until it is repaired, or another one possibly fitted to the building, Kochan will have to be content with a small walk along the balcony each day – and a 30 percent reduction in her rent.

CONFRONTING CORONAVIRUS
Some Swedish care homes have had no cases of Covid-19 – what did they do right?
Url copied to clipboard!