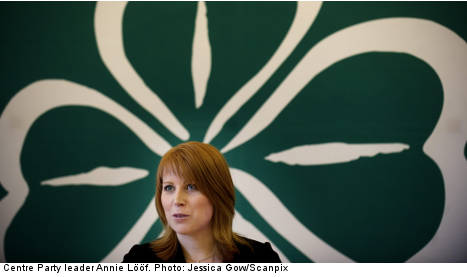 The party polled 3.2 percent in the Sifo poll published in the Svenska Dagbladet daily on Sunday, below the threshold for Riksdag seats.

The poll comes following weeks of crisis for the party after a rift opened over the new party programme which included radical new ideas on immigration, polygamy and changes to compulsory education.

Party leader Annie Lööf was forced to cut short her holiday in early January in order to return to Sweden to deal with an ongoing crisis stemming from opposition to the platform, set to be presented at the party’s conference on February 5th.

Lööf has since tried to stem the flow of criticism from some party members by reiterating her desire to jettison proposals legalizing polygamy and inheritance rights.

Talking to The Local last week, Lund University political scientist Mikael Sundström, explained that the party is in the midst of a transition and this has created conflict between more socially liberal and more libertarian members.

The Centre Party has been struggling in voter polls for several years but Sunday’s poll is the lowest since 1967, when Sifo first began conducting regular surveys.

The major parties meanwhile advanced in the poll, with the Social Democrats up 1.5 percentage points to 33.6 and the Moderates climbing 1.1 points to 29.3 percent.

Sifo interviewed 1,935 voters between January 7th-17th and asked who they would vote for if an election were to be held today.