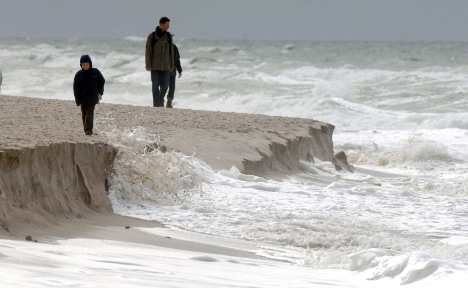 Germany will be meteorologically divided on New Year's Eve - while northern Germans might have to carry umbrellas to cover their champagne, southerners will need scarves and gloves to enjoy their firework displays.

Large swathes of the country, including the states of Lower Saxony, North Rhine-Westphalia, Schleswig-Holstein and Mecklenburg-Western Pomerania, will have to contend with wind and rain next week, according to the German Weather Service (DWD).

The oppressive cloud cover will break up further south, though the temperatures – warm enough to open beer gardens on Christmas Day – will sink to below freezing as 2013 gets under way. The national average will be between three and seven degrees Celsius, while chilly south-east Bavaria will enjoy the clearest New Year’s Eve skies.

“It’s not the best conditions for New Year’s Eve,” said DWD meterologist Johanna Anger, and New Year’s Day also promises to be changeable, with temperatures hovering between four and nine degrees across the country.

The DWD also warned that the wet weather in the north could also create slippery conditions over the weekend. The south, meanwhile, will remain dry and sunny on Saturday with temperatures up to an unseasonable 13 degrees in the south-west.

But Sunday will likely be more overcast across the country, even though the rain will be confined to northern Germany. Winds will pick up throughout the weekend and coastal and mountain areas could well turn stormy.