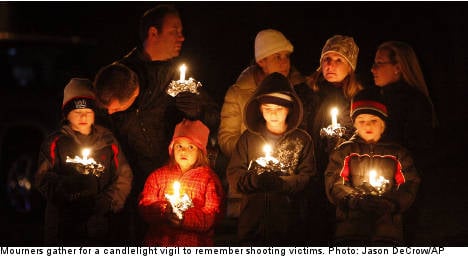 There are currently no such guidelines in place.

“I know there have been discussions about whether or not our schools are too open,” said Per-Arne Andersson, department head at the Swedish Association of Local Authorities and Regions (Sveriges Kommuner och Landsting).

Andersson said the issue may now be raised again.

But so far the authorities have not considered it necessary to draft special guidelines for security and crisis management at schools.

Education Minister Jan Björklund believes each municipality should take responsibility for their schools, as is currently the case.

“My understanding is that each municipality has crisis plans for these kinds of events,” he said.

“When it comes to preventative work on the other hand I see a need for constant improvement.”

When a 16-year-old boy was shot to death at the Bromma gymnasium high school in 2001, Björklund, then the Stockholm Schools Commissioner, launched an inquiry which concluded that it would be inappropriate to install metal detectors and surveillance cameras in Swedish schools.

However, many Stockholm schools independently decided to start keeping visitor registers and to keep doors locked.

In Gothenburg there have been drills for potential school shooting scenarios. Entrances and emergency exits in the city’s schools have been mapped out, said the city’s education director, Sven Höpner.

Swedish police are taking special measures after the Connecticut tragedy.

“Of course we are intensifying our surveillance online after an event like this,” Stefan Marcopoulo, a National Bureau of Investigation (Rikskriminalpolisen) spokesman told Sveriges Radio (SR). He declined to go into detail about the police’s work, however.

Swedish Prime Minister, Fredrik Reinfeldt, has sent a letter of condolence to the U.S. government and issued a statement saying that Sweden is mourning with all those who lost children and friends in Newtown.

“The losses are unfathomable and the sorrow is great,” said Reinfeldt.

“Together we will protect our open society and try to prevent this from happening again.”

The gunman in Newtown, Connecticut allegedly shot his mother in her home before killing 20 pupils and six adults at a nearby elementary school. He then turned the weapon on himself.

Swiss weapons exports are on track for their highest year on record. Photo: FABRICE COFFRINI / AFP

Switzerland exported CHF690 worth of weapons over the first nine months of 2020. That’s a 38 percent increase on the CHF500 million sold over the corresponding period in 2019.

The biggest customers for Swiss weaponry were Denmark, Indonesia and Germany.

In total, 76 countries bought Swiss weapons during the period.

According to current figures, weapons exports are on track to be the highest in Swiss history – beating the record of CHF893 million set in 2011.

The news has been heavily criticised by a number of non-government organisations critical of weapons being sold to countries at war or who may use them against their own citizens.

The Organisation for Switzerland without an Army (GSOA) and Terre des Hommes have been critical of the figures, particularly as the industry has called for a decrease in regulation in recent years.

GSOA wrote in a statement “the death business is flourishing”.

Saudi Arabia – currently involved in a conflict in Yemen – appear on the list, along with Brazil. Weapons opponents are concerned the Swiss exports could be used in the country’s slums, Der Bund reports.