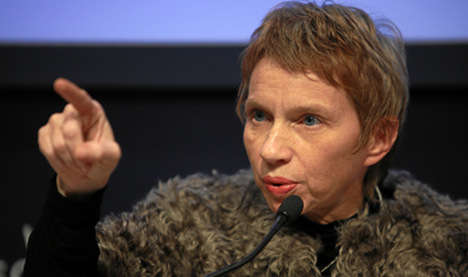 President François Hollande has himself dangled the threat in talks with the billionaire, ranked 21st in the Forbes list of the world's wealthiest people, over the row on the Florange plant in the eastern Lorraine region.

France has threatened to take over the plant if ArcelorMittal goes ahead with plans to permanently close two blast furnaces on the site that the company regards as uneconomic.

ArcelorMittal, which wants to continue to operate the rest of the site, has given the government until Saturday to find a new investor willing to take over the furnaces.

"If the aim through these statements is simply to exercise pressure, to engage in blackmail in the course of negotiations, it is unacceptable," she on RTL radio.
Parisot said it was not up to the state "to start telling each company in France 'this is our strategy'" adding that only "an entrepreneur can know if something is profitable or not."

Former premier Alain Juppé a heavyweight figure in the right-wing opposition, called for Montebourg to be sacked over remarks he deemed
"calamitous" for the image of France.

"It is time to replace someone who is on his way to becoming the minister for industrial collapse," Juppé wrote in his blog.

The case, a litmus test of Hollande's commitment to spur growth, create jobs and boost the low competitiveness of French industry, has created outrage in India with messages on social media networks saying Mittal would have been treated differently if he was a white man.

Some of them also recalled the opposition he faced from Arcelor executives and French interests during his contested takeover of the company in 2006.

"This is not socialism, this is racism," the Indian site Firstpost said in an article.

"ArcelorMittal is not the first to cut jobs in France. Peugeot has announced 8,000 job cuts in France, Sanofi 900 and Carrefour 500-600," it said referring to blue-chip French companies.

Hollande had dangled the threat of nationalization just minutes before his one-to-one talks Tuesday with the India-born Mittal, which the government spokeswoman said had been "frank and firm."

ArcelorMittal argues that the blast furnaces at Florange are uncompetitive in current market conditions, partly because they are too far from ports for transportation.

The company has warned that nationalisation of the plant would cast doubt on the future of all its operations in France, where it employs 20,000 people.

The French government, meanwhile, wants the company to guarantee the estimated 650 jobs on the line.

Montebourg caused controversy earlier in the week when he said Mittal was not welcome in France, comments that were quickly disowned by his colleagues and from which he subsequently backtracked.

But the minister, widely regarded as a loose cannon whose mantra to promote 'Made in France' has even seen him pose in a Breton sailor top for a popular magazine, said on Wednesday that an investor in the business is interested in buying Florange.

"We have a buyer, who is a steelman, an industrialist, who is not a financier, who wants to invest his own money and who is ready to put almost 400 million euros into renovating this plant," Montebourg told deputies.

A group of socialist members of parliament has objected that Mittal does not have French interests at heart.