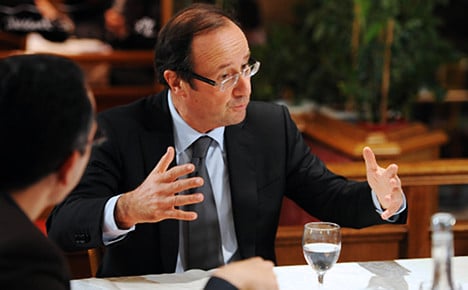 Addressing his biggest press conference since taking office in May, the Socialist leader said there was no rift with the right-wing German Chancellor Angela Merkel, who had openly backed Hollande's predecessor Nicolas Sarkozy ahead of the presidential election.

Describing Franco-German relations as "good", Hollande denied rumours of a chill between the eurozone's two top economies following reports in the German media that Berlin was worried that Paris would fail to push through decisive economic reforms.

Hollande focuses on spurring growth while Merkel's focus is on austerity-only policies.

"Firstly there are rumours and confidences that are not confirmed," he said. "The reality is that the chancellor and I have a joint responsibility to take Europe forward and nothing must be done to weaken this.

"What counts is not what is said but what we say," he said, referring to himself and Merkel and added: "I speak frankly to the chancellor but we don't give each other lessons."

The panel and the German government quickly denied they had any such plans.

But the confusion was widely interpreted as a sign of Berlin's displeasure that France could again fail to respect the EU's public deficit limit of three percent of GDP in 2013.

The government is being forced to apply €37 billion ($47 billion) in austerity next year to achieve this.

In a major foreign policy decision, Hollande said France recognized the newly formed National Coalition of the Syrian opposition as the sole representative of the people.

France is the first major power to officially recognize the broad-based opposition coalition established in Doha on Sunday.

He also said the question of supplying arms to the Syrian opposition, hitherto opposed by Paris, would have to reviewed by France and all those countries which recognized the National Coalition.

Hollande, whose opinion ratings have slid to a historic low in the first six months in power, also reiterated his government's pledges to bring an economic turnaround within the government's five-year term.

His press conference came as a new opinion poll showed that 58 percent of the French were unhappy with him, according to a survey conducted by the OpinionWay for the Metro free-sheeter.

"I understand the worries of the French in the face of crisis," he said, outlining "three major challenges — the reorientation of Europe, reducing French debt and improving competitiveness."

"A weak France will mean an powerless Europe," he said.

On the industrial front, his government faces a winter of discontent.

Thousands of layoffs and factory shutdowns have added to the woes of France, whose share in global trade has shrunk from 6.3 percent in 1990 to 3.3 percent in 2011.

France's hourly labour costs in the manufacturing sector are a fifth higher than the eurozone average. The high cost of employment has been blamed for having helped drive unemployment up to near record levels of just over three million people: that comes to around 10 percent of the workforce.

The socialist government has set a target of eliminating the country's massive trade deficit during its five-year term: last year, it stood at a record €71 billion ($90 billion).

But the government has also announced tax breaks worth up to €20 billion a year aimed at offsetting high payroll taxes that have dulled the competitive edge of French companies.