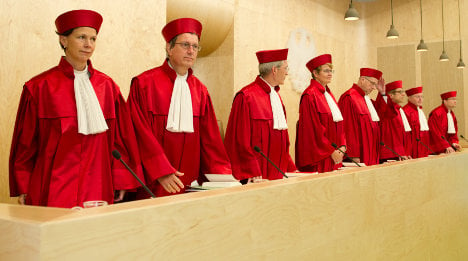 “With its broad rejection of the urgent suits against the ESM and the European Fiscal Compact, the Constitutional Court has practically given the German government a free hand to continue its course on saving the euro,” wrote Ludwig Greven in Die Zeit weekly newspaper.

But there are caveats. The government cannot extend Germany’s guarantee limit of €190 billion without the express permission of parliament, and must keep parliament informed of any bailout loans to debt-stricken eurozone countries.

This meets one of the central demands of the court petitioners, who included the Bavarian conservative Peter Gauweiler, the socialist Left party, plus a campaign of some 37,000 Germans.

And Greven spotted an undercurrent of criticism in the court’s judgement. “From the verdict one can glean that the judges have a few doubts whether the draft of the ESM treaty sticks to its own principles on one or two points,” he said. But crucially, he said, the judges made clear that deciding this was up to the government.

Heribert Prantl of the left-leaning Süddeutsche Zeitung daily was more cutting. “The Karlsruhe verdict on the ESM and the Fiscal Compact dodges the most important questions,” he wrote. “It’s another ‘yes-but’ judgement. But this time the yes is just as weak as the but.”

The conservative Die Welt said the judgement only opened the door to further lawsuits. “[Court President Andreas Voßkuhle] admitted that the Constitutional Court is just groping around in the same fog we’re all groping around in,” wrote Thomas Schmid.

“The court has to pretend that it moves exclusively in the realm of the law, and not in actual reality,” he added. “That’s why it could not comment on the fact that the European Central Bank decided to buy unlimited government bonds just six days before the verdict.”

Essentially, wrote Schmid, the court was admitting that “it was just another player in the European game, and not the most powerful one.”

Reinhard Müller, of the Frankfurter Allgemeine Zeitung daily, also thought the court clearly took it as “an affront” that the ECB announced its government bonds scheme shortly before the ruling was announced.

“What is clear, and here we can see the ‘strong signal’ of this verdict – Germany cannot allow itself to be pushed around. Berlin has to take one step at a time, under Karlsruhe’s watch.”