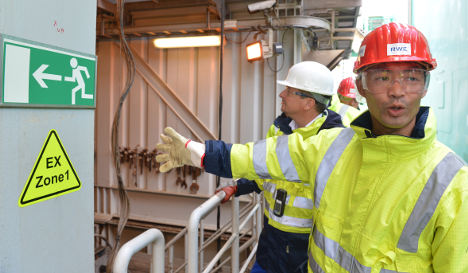 “I’ve lost my illusions,” Rösler told Focus magazine. He is also vice chancellor and leads the pro-business Free Democrats in the ruling coalition.

“I proposed with German businesses a whole series of support measures for the Greek government. The Greeks have hardly responded to our offers,” he said.

Germany will block any new aid to Greece if the government does not fully comply with the terms of previous rescue packages, even if other countries support unlocking funds, another senior lawmaker said on Sunday.

The deputy head of Chancellor AngelaMerkel’s conservative parliamentary bloc, Michael Fuchs, told the Handelsblatt newspaper the government was ready to use its veto if it was unhappy with findings from the Greececreditors “troika”.

“You can quote me: even if the glass is half-full, that is not enough for a new aid package,” he said in an interview to appear in the paper’s Monday issue. “Germany cannot and will not agreeto that.”

The eurozone partners are waiting for the report on Greece from the troika of inspectors from the European Union, International Monetary Fund and European Central Bank.

Their verdict, which is expected by mid-September, will determine if Athens receives the next instalment of €31.5 billion ($38.7 billion) in rescue funds.

Fuchs said that even if other eurozone countries call to release the funds after the report, “Germany will use its veto” as part of the EFSF temporary rescue fund if it concludes that Greece” has not met the requirements”.

He noted it was impossible to force a country out of the eurozone but assumed the “Greek government knows what it needs to do if it is not in a position to fulfil the reform requirements.”

Germany “has reached the limits of what it can bear,” he added.

Patience with Greece’s sputtering reform efforts is wearing thin in Germany, Europe’s effective paymaster, with leading members of Merkel’s ruling coalition openly questioning its ability to stay in the eurozone.

The government’s official line is that it will wait for the troika report before drawing any conclusions.

On July 22 Rösler had voiced his doubts concerning the possibility of Greece staying in the eurozone, saying that in his view there had been “nothing frightening” about a Greek exit “for a long time”.

The next day the German government said itwas torn between hope and scepticism about Greece’s ability to meet its commitments to its international creditors.

The responsibility for managing the debt crisisfor Germany however rests with Finance Minister Wolfgang Schäuble, not Rösler.