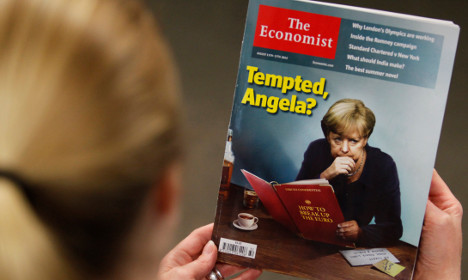 “The stabilisation of the currency union is not an aim in itself that can or should be pursued regardless of all the costs that come with it,” wrote Otto Kentzler, president of the German Confederation of Skilled Crafts.

“The costs should never be greater than the benefits,” said the representative of around a million companies and five million workers in Germany.

In a position paper on the confederation’s website, he warned that if the costs became too great, people would no longer agree to carry the burden.

The latest poll conducted by public broadcaster ARD suggested 84 percent of the population expected the worst of the euro crisis was still to come, the Handelsblatt newspaper reported on Friday.

Merkel only recently promised publicly, first with French President Francois Hollande, and then with Italian Prime Minister Mario Monti, to do all that was needed to rescue the euro.

But she needs to push on, and be effective, the influential British news magazine The Economist wrote this week.

It put Merkel on the cover reading an imagined paper on how to break up the euro, and drinking a coffee with a bottle of whisky at her elbow – with the question, “Tempted, Angela?”

And it said she needed to move, otherwise it said, “the choice will be between an expensive break-up sooner and a really ruinous one later.”