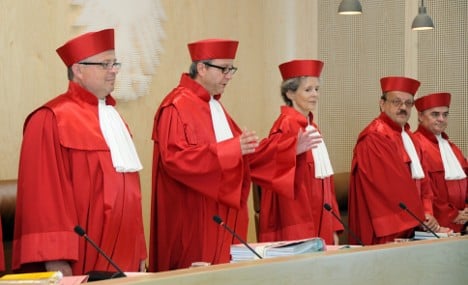 Those who filed a challenge at the court, hoping to prevent Germany joining the European Stability Mechanism (ESM), say it would severely undermine German sovereignty by transferring too much power to European institutions.

Former Justice Minister Herta Däubler-Gmelin headed an application signed by 12,000 private individuals, while a group of professors also submitted a complaint – as did both conservative and far left politicians.

The ESM is different from other euro rescue plans as it would set up a permanent fund of €700 billion – 27 percent of which Germany would provide.

The fiscal compact accompanying it limits the amount of money different states could borrow, and set out how those which borrowed too much could be punished.

Opponents say this permanence would undermine the ability of German politicians to make budgetary decisions. A handful of demonstrators assembled in front of the court in Karlsruhe on Tuesday morning, symbolically carrying a copy of the constitution to the grave.

But the fact that the court is taking its time to consider the ESM – putting its ratification on hold – has infuriated many politicians who have been urging the judges to decide in its favour. Some have been warning of dire consequences for the entire continent should the court stop the rescue measures.

Normally politicians refrain from commenting on the court’s work as a sign of respect for its importance and independence, so this abandonment of normal practice shows how desperate some are to see the euro rescue progress.

Justice Minister Sabine Leutheusser-Schnarrenberger was even moved to warn colleagues against trying to pressure the court. “Government and politicians should keep absolutely out of this – the Constitutional Court does not need any advice,” she told Tuesday’s Augsburger Allgemeine newspaper.

“The judges know the significance their decision will have for the economy,” she said.

Free Democratic Party MEP Alexander Count Lambsdorff had criticised the court for not knowing enough about European institutions to be capable of making a decision. He was echoing Social Democrat Martin Schulz, president of the European Parliament, who last week said some of the court’s verdicts were “characterised by great ignorance.”

Parliamentary president Norbert Lammert, of Chancellor Angela Merkel’s Christian Democratic Union (CDU) warned at the weekend of grave consequences should the ESM and fiscal pact not succeed. “That is why I have no doubt that the Federal Constitutional Court will include this context in its judgement,” he said.

Former Chancellor Helmut Schmidt even entered the fray, calling last week for the court to rule in favour of the measures.

He said the court would not examine the constitutionality of the ESM and fiscal pact, but only decide whether to ask the president to delay signing the law pending a closer examination – which would cause significant hold-ups. The court is expected to issue a ruling by the end of this month.

The ESM was supposed to start operation in July, but its launch depends on ratification from enough eurozone states to ensure that 90 percent of its €700 billion capital is covered. Until now 13 of the 17 eurozone states have ratified their participation.

The Estonian constitutional court is checking the treaty, while the Italian and Maltese parliaments have yet to decide. Because Germany is due to contribute 27 percent of the capital, it effectively has a veto on whether it happens.

The fiscal pact, which obliges those who sign it to balance their budgets and reduce national debt, was signed by 25 of the 27 European Union countries in March – UK and Czech Republic stayed out of it.

It has to be adopted in national law, and needs at least 12 eurozone countries to ratify it before it can take effect – which is planned for at least the start of 2013. Five eurozone countries have ratified it – plus Denmark, Lithuania, Latvia and Romania.