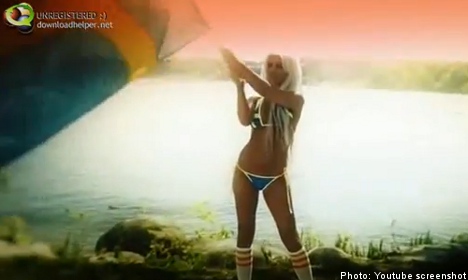 The music video (below) features a team of Swedish glamour models in skimpy blue and yellow swimwear, engrossed in a sweaty regimen of warm-ups and training exercises.

The clip comes courtesy of “Scandal Beauties” – the self-proclaimed biggest net-magazine for men in Scandinavia – featuring the “best collection of glamour models” from the region.

On the magazine’s official website, the video, shot recently in Stockholm, is hailed as the “best thing to happen to Sweden since Zlatan’s back-heeled goal against Italy in 2004”.

While the website admits that the Swedish side may not succeed at the Euros this year, one thing is for sure, the country’s fans come first in at least one important sense.

“There’s one thing we’ll definitely win and that’s which country has the hottest supporters,” the magazine wrote.

“Zlatan, Ronaldo and Rooney are all fine, but to see Catherine Holst, Amandra Brédin, Stina Wengler, Therene Hernetoft and more, battling it out in mini-bikinis hits a bit harder.”

The song’s lyrics, though brief and rather repetitive, touch on the sentiments of footballers and fans alike:

“I hear the crowd as they ignite, just like stars when they collide… our names will be living in their memories.”

In the video, after a rigorous warm-up session, the “beauties” enjoy some light dribbling, followed by the models enjoying what appears to be a series of solo water fights with their own drink bottles.

And for the hardcore supporters, there is also a good deal of Swedish flag waving and close-ups of the bikini team’s uniforms.

For those who really appreciate the music, the song is also available on Spotify.