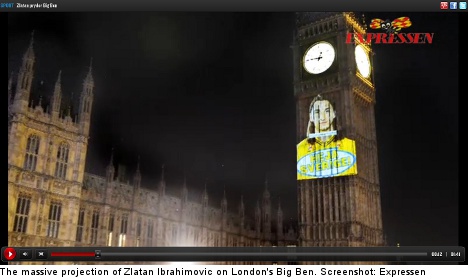 The British tabloids were left licking their wounds on Friday morning, as a Swedish newspaper launched a tyranny of cheeky headlines predicting the Saturday morning fall-out from tonight’s crucial Euro 2012 match between Sweden and England.

A bold move by the Aftonbladet newspaper saw them publish a series of fictional front page fall-outs that they predict will be looming large in the English press on Saturday after a predicted 5-0 win for Sweden.

The Swedish jokers, feeling confident enough to throw the first punch across the North Sea, begun their crusade of mischief with a mockery of the Daily Mirror – picturing a despairing England goalkeeper Joe Hart on the front page of the Saturday morning English tabloid, accompanied by the headline, “Broken Hart.”

Clearly stung by the attack of banter – the English team at the Mirror soon responded with a front page mock-up of their own – picturing a disconsolate Zlatan Ibrahimovic underneath the headline “Zlatastrophe!” on the face of Aftonbladet.

In a more than ferocious defensive blow by the English, they also conjured stories of financial meltdown for Swedish company Ikea, and claimed that the members of Abba are actually Norwegian.

The tabloid war comes hours after another Swedish tabloid pulled off the most garish of stunts in London city centre.

The Expressen newspaper managed to project the image of Zlatan Ibrahimovic on to the face of Big Ben, with Sweden’s talisman accompanied by the patriotic slogan “Heja Sverige,” or “Go Sweden.”

Reporters from the newspaper beamed contentedly as they watched the reactions of outraged Brits and sniggering Swedes passing by the famous clock (see video below).

“That is really cool.”

The war of words will surely continue right up to the kick-off in tonight’s match in Kiev, with Sweden looking to get themselves back into tournament contention after a disappointing opening defeat to Ukraine.

Andy Carroll is thought to be in line for a start for England, as Roy Hodgson plots a route through a Swedish back-line that has been labelled as extremely shaky in the air.