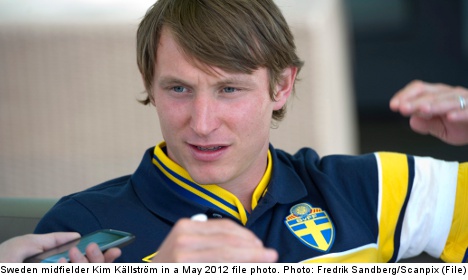 The 29-year-old’s remarks came in the wake of coach Erik Hamren’s astonishing outburst after their opening 2-1 loss to co-hosts Ukraine when he labeled his players ‘cowards’.

Sweden are bottom of the group with Ukraine topping it and England and France both on a point after their 1-1 draw in Donetsk.

However, Hamren will hope that the good record of the Swedes against the English will carry some weight.

They have invariably proved to be stubborn opponents for England, who could only draw with the Scandinavians at the 2006 and 2002 World Cups while suffering a 2-1 loss at the 1992 Euros.

“Not enough players showed that they wanted the ball,” said the 54-year-old, who admitted he had not slept much the night of the defeat.

“In the first-half we were too afraid, we should have done better.

“It is our performance which was insufficient. In this game you need 11 players on the top of their game, as we are not a squad with a deep pool of talent.

“In the first-half against Ukraine there were only maybe five or six players who answered the call to duty, and that is not good enough and cannot be repeated.”

His captain Zlatan Ibrahimovic – whose goal put them ahead before two goals by legend Andrei Shevchenko gave Ukraine victory – was not happy either apparently incensed at his team-mates waving to their girlfriends and wives as they left the pitch.

Källström , who has won over 90 caps for his country since making his debut in 2001 and is appearing in his fourth major finals, said that ironically the goals they had conceded were when they were playing to their game plan and similar errors on Friday would be fatal for their campaign.

“We don’t have much margin for further mistakes – we’ve used up our joker,” said Källström , who has won two league titles and two French Cups since joining Lyon in 2006.

Fellow midfielder Rasmus Elm accepted that Hamren’s remarks were justified and that now was the time not for bitterness and rancour but for pulling together and putting up a performance to make the Swedish people proud.

“It’s hard to disagree with what he said really,” said the highly-rated 24-year-old.

“We were certainly feeling very insecure in the first half. We have to accept his comments and the certain thing is that we have to be better against England.

“If we play like that again against England, then we have no chance.”