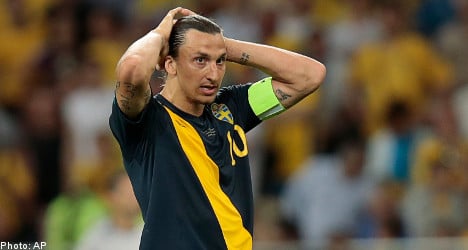 The night belonged to Ukraine’s veteran talisman Andrei Shevchenko, who drew the adulation of the home supporters in Kiev with a second half double of headed goals in the 55th and 61st minute that gave the hosts a 2-1 lead.

It was looking rosy for Sweden only moments earlier, when Zlatan Ibrahimovic had put them 1-0 up with a poacher’s finish.

In a tight first half, Sweden looked to feel their way into the game’s intensely humid conditions, often sitting back and looking to hit on the counter attack.

Erik Hamren’s men created the best chance of a tense opening half, as Ibrahimovic peeled away majestically from his marker to give himself acres of space.

It looked as if he had all the time in the world to guide the ball into the corner of the net, but Swedes hung their heads as they watched the ball hit the outside of the post and go wide.

Ibrahimovic was looking in lethal touch in the first half, with his markers finding it difficult to deal with his strength and hold up play.

Ibrahimovic’s opening goal for Sweden finally came early in the second half. With a Ukraine defender lying motionless on the floor, Sebastian Larsson capitalized on the new-found space to drive down the right hand side, and eventually play in a deep cross.

The Ukraine defence couldn’t fully clear, and with the ball falling to Kim Källstrom at the back post, Ibrahimovic pounced on the Lyon midfielders poked cross ball to pass the ball underneath the Ukraine goalkeeper and into the back of the net.

It was exactly the kind of lift-off to a tournament the Swedish captain needed, and he will be hoping to build on this good early form in the rest of the tournament and against stronger opposition.

The goal proved not to be the catalyst for Sweden to go on to win however, as from then on the night belonged to Ukraine’s 35-year-old favourite and former European Player of the Year Shevchenko.

With Sweden looking in command at 1-0, the equalizing goal really came out of nothing. Andriy Yarmalenko put in some smart dribbling work on the right hand side, before delivering a lethal cross for Shevchenko to head in at Swedish keeper Andreas Isaksson’s near post.

Six minutes later there was more glory for Shevchenko.

Oleh Gusev’s inswinging corner was met by the veteran, who had shaken off the sloppy marking of striker Ibrahimovic with some classy movement. His flicked header past the despairing Isaksson put the hosts 2-1 up and sent the home fans into ruptures. It was the moment of glory for Shevchenko that the whole of Ukraine had been waiting for.

Both goals highlighted Sweden’s need to tighten up in defence and in the air, something many experts had earmarked as the main weakness in the Swedish side.

Sweden pressed for an equalizer, and with seconds to spare they spurned a host of guilt-edged chances.

The best chance fell to substitute Johan Elmander – thrown on despite still nursing a foot injury – who after great hold-up work once again by Ibrahimovic, smashed his volley over the bar in a one-on-one situation.

The miss was greeted by a look of dismay from teammate Ibrahimovic, who would have been banking on his strike partner to score after his expert hold-up work.

Olof Mellberg may have also felt he had salvaged a point for Sweden in the dying moments, but his poked volley from a hanging cross looped over the crossbar.

Before the game Ukraine coach Oleh Blokhin said it would be curtains in the tournament for whichever side lost this opening game. After being dealt a bitter blow in defeat, Hamren’s men must now pick themselves up for the even trickier prospect of facing England on Friday, followed by France.

The two heavyweight sides in the group played out a 1-1 draw earlier in the evening to leave Sweden bottom of the group, and with an uphill task to advance to the quarter finals.

“Now the situation is we face two games to try and make this situation better,” a disconsolate Ibrahimovic added post-match.

Sweden’s talisman will now have to emulate the heroics of his Ukrainian counterpart Shevchenko in the tournament’s forthcoming games against England and France to keep his nation in the hunt for European glory.