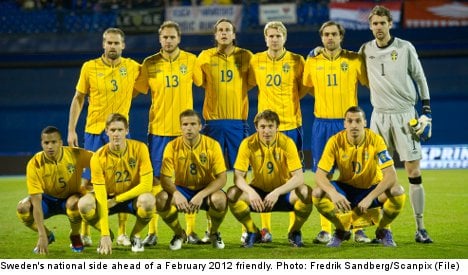 With the opening kick-off of the Euro 2012 set for Friday, June 8th, and Sweden’s June 11th opening match against Ukraine fast approaching, the national team faces a tough task in its bid to recapture the success it had in the 1990s.

Erik Hamren’s squad faces a mammoth task just to advance from its group, with co-hosts Ukraine, backed by home advantage, joined by power-houses England and France.

Sweden will feel they need to take at least 5 points from these three matches to have any chance of progression.

The outlook from Swedish experts, however, remains remarkably upbeat.

For Erik Niva of Aftonbladet and Anders Lundqvist of Dagens Nyheter (DN), anything less than quarter final qualification would represent failure Hamren’s side.

“When we play well, the sky’s the limit,” explains Niva.

“But when we’re bad, we can be extremely poor, particularly at the back, where often the defensive line can provide little or no protection.”

Niva brings up Sweden’s recent friendly against Iceland, a 3-2 victory which showcased both the good and bad sides of the national team.

“The evidence was there in the Iceland friendly game, where for the opening 20 minutes Sweden looked top quality, but after the goals at times they looked shaky in defence,” says Niva.

“The realistic expectation is to qualify from the group, then after that anything can happen.”

Much of the country’s attention for the summer’s championships will be focused on talisman Zlatan Ibrahimovic, who despite a club career boasting a host of medals and honours, is still yet to really prove his worth on the international stage, even at 31 years of age.

Ibrahimovic has been looking in lethal touch, however, in the warm-up games he has featured in so far, taking Iceland to pieces in the opening 20 minutes in Gothenburg.

A crisply struck volley got him on the score-sheet, while an exquisite piece of skill turned defenders inside out to provide the assist for a second minutes later.

He also scored a ripping penalty against Serbia on Tuesday, sealing a 2-1 victory for the home team in Stockholm.

“Zlatan has never been in this kind of great shape going into a summer tournament, and that could be what finally makes this the summer for him to succeed,” says DN’s Lundqvist.

“Even [former manager] Lars Lagerbäck has said this is the best form we’ve ever seen from him.”

Niva agrees that getting the most from Ibrahimovic will be key to securing Sweden’s success at the Euros.

“We’ve never found the most potent formula for Zlatan, and at 31 we still don’t know where he stands in terms of his ability in the national team,” the Aftonbladet sportswriter explains.

“This summer his chances of performing well are high, but then again, we’ve said that going into every summer tournament since he started playing.”

The AC Milan striker is expected to occupy a “number 10” role in the side, with critics believing that he needs the stability and support provided by Johan Elmander up front to find his best attacking form without leaving the rest of the side exposed.

Galatasaray striker Elmander is currently nursing a foot injury, but is expected to be fully fit by the time Sweden face England on June 15th, a game in which, crucially, the English will be missing their suspended striker Wayne Rooney.

Both pundits also believe that much is to expect from Rasmus Elm, who at 23 is looking like he could play at a higher level than his current side AZ Alkmaar in the Dutch League.

“He has the ability to surprise people and be the missing link in the side. He was the man of the match against Iceland and looked like a quality player.”

Whilst question marks remain over Sweden’s defensive capabilities, as an attacking force the side has shown great potential.

With creative players that display attacking intent throughout the side in Martin Olsson, Kim Kallstrom and Sebastian Larsson, Hamren’s players will believe they can pose a threat to the best of Europe’s defences.

Despite a tough group, Sweden will go into the tournament optimistically after an impressive set of results in warm-ups and qualifying, including a win over World Cup runners-up the Netherlands.

And with similarly un-fancied teams such as Greece and Denmark having taken the Euro title in recent years, if Hamren gets it right, Sweden may even dare to dream of a medal placing.