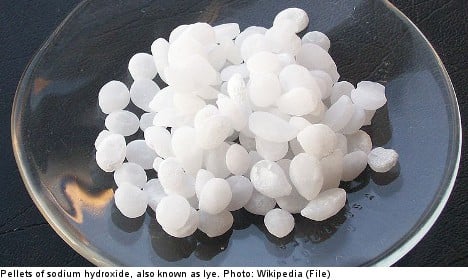 Authorities in Halland County issued a warning early Monday evening cautioning residents in Halmstad, Sennan and Åled against using municipal water supplies because the water was been found to be corrosive and dangerous.

“The water may contain caustic soda, but emergency services aren’t sure in what concentrations,” Halmstad police spokesperson Andreas Bengtsson told the TT news agency shortly before 8pm on Monday night.

“It can be corrosive to the skin and internal organs so people shouldn’t shower, drink or wash themselves with it.”

Nor could the water be used after boiling as the lye isn’t removed by boiling.

By Tuesday morning, however, the water in most parts of Halmstad had been deemed safe.

“We’ve taken tests, closed down the water works and affected parts of the distribution network and pushed fresh water into the pipes,” Torsten Rosenqvist of Halmstad municipality told TT.

Water in Sennan, however, remained contaminated and a tanker truck has been driven to the area.

The contamination was caused by an overdose of sodium hydroxide being accidently added to the city’s water supplies around 6.30pm on Monday night.

The chemical, also known as lye, is used to raise the pH level in the municipal water system.

The release took place in water basin in Sennan in eastern Halmstad, according to police.

Following the release of the lye, pH values of the water shot up to between 11 and 12, compared to a normal pH value of 7.