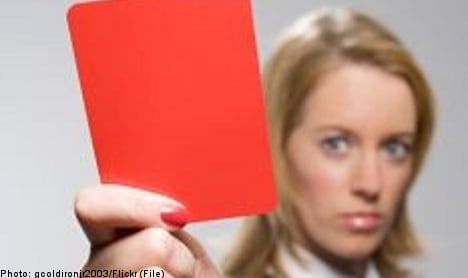 Headlines about bullying, school violence, and concerns about a lack of respect for educators on the part of students, while perhaps exaggerating the problem, have nevertheless focused attention on the issue of discipline in Swedish schools.

Across the country, schools are trying out various initiatives, including a few rather unorthodox methods for keeping disruptive students in check.

While the rough and tumble world of the football pitch may strike many as an odd place to look for inspiration when it comes to enforcing discipline, the Hjortberg primary school in Falkenberg in southwest Sweden has found that an approach used by officials to deter players from falling afoul of the rules also appears to work in the classroom.

After employing a football-inspired system of red and yellow cards during physical education classes, the school was so impressed by the results that educators have now expanded the approach to other classes as well.

“It’s a way of increasing safety and improving the climate in the classroom above all” school principal Karin Hultskår tells The Local.

The card system is based on a scale, depending on the gravity of the bad behaviour.

If a student does not listen, or disturbs the lesson, he or she receives a yellow card. If the transgression is more serious, the student receives a red card and has to leave class for a certain period of time.

When a red card is awarded, the child’s parents are contacted and after being “sent off” three times, the school calls both parent and child to a meeting.

Hultskår added, however, that the problem of discipline in Swedish schools has been “blown out of proportion” to some extent in the Swedish media.

“I don’t think in general that Sweden has a serious problem with school discipline,” she says.

Nevertheless, similar methods are also being tested at other schools, as Swedish administrators and teachers try to head off potential problems and create a better working environment for all.

”Having a safe creative environment is absolutely key for both the children and the teachers,” Donald Christian, principal at the International English School in Nacka Strand, tells The Local.

The publicly funded-privately managed network of “free schools” follow the Swedish curriculum but offer roughly half the lessons held in English and stresses zero tolerance for bullying and employs a system of discipline based on ’tough love’.

”It is important to think of discipline as a part of a wider package,” Christian explains.

”I firmly believe in our mantra ’from structure comes creativity’. Children who come here experience a different kind of environment. So if you lay the groundwork for the kids to learn where the limits are and if those limits are firm but fair, they will understand and come to like that structure.”

The school uses a carrot-and-stick system known as LUNDS (Late, Unprepared, Notice (i.e, if a child forgets gym clothes), Disruptive and finally, Star, which is awarded for especially good behaviour.

However, a detention system is also enforced for serial offenders.

A survey carried out last year by the Sifo polling firm found that six out of ten Swedes think that education is the most important social issue for politicians to prioritize.

It also showed that many people think teachers should have greater powers to impose order in the school, for example, being able to confiscate mobile phones, impose detention and dismiss unruly students from classrooms.

”There is strong support among the public for giving teachers the ability to take actions to create a good working atmosphere. Teachers often say that they feel isolated so it is a difficult balancing act (keeping both students and teachers happy). Students may have problems and they must of course be taken seriously, but there are also teachers who are afraid to act, because they may either be made to suffer personally or reported,” says Metta Fjelkner President of the National Union of Teachers in Sweden (Lärarnas Riksförbund).

”Students have the right to report a teacher, but the question is, where is the line between abuse and appropriate punishment? Teachers have an important educational role as well.”

Although there are currently no national rules on how schools treat discipline, there are general guidelines which can then be interpreted by individual principals.

”Basically, I think there must be certain rules that everyone should follow, but I don’t necessarily think that there is a need for special systems,” says Fjelkner.

So while Swedish schools may not be the centres of mayhem they sometimes appear to be in the Swedish media, there is plenty of work to be done in terms of finding approaches to maintaining discipline and ensuring schools provide an environment conducive to learning.

At the Hjortberg school, principal Hultskår is careful to point out the new “yellow card, red card” system shouldn’t be thought of as a system of punishment, but rather as a way to make class time more secure and productive.

However, it remains to be seen if the school’s experiment will ultimately succeed.

”It is too early to say after just a couple of weeks how effective it has been,” Hultskår told The Local.