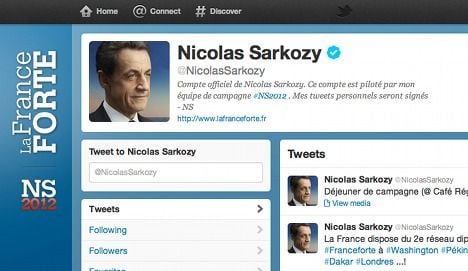 Twitter users started tweeting on Monday that a number of accounts spoofing or criticising the president had been removed by the social networking site.

Accounts removed included @SarkozyCaSuffit (Sarkozy That’s Enough) and @_nicolassarkozy. When either are searched for the message “Sorry, that user is suspended” appears.

The website of Le Nouvel Observateur reported that the closure of the accounts happened at the weekend, shortly after the president joined the social networking site on Wednesday with his own official account, @NicolasSarkozy. The president now has around 89,000 followers after just five days.

Other accounts to have been suspended include @mafranceforte, which uses the campaign slogan of the president, and @fortefrance.

Newspaper Le Monde was reporting on its website on Monday that a member of the president’s campaign team said they had requested the accounts be disabled.

However, the spokesman said they had only asked for accounts that could be mistaken for the president to be removed, and not those that were obviously parodies, such as @SarkoCaSuffit or @mafranceforte.

Twitter’s own rules about parodies say that users are “allowed to create parody, commentary or fan accounts.”

The rules state that, to avoid impersonation, “an account’s profile information should make it clear that the creator of the account is not actually the same person as the subject of the parody.”

The campaign group Internet Sans Frontières (Internet Without Borders) published a response from Twitter which, it says, was sent to the owner of the account @_NicolasSarkozy giving reasons for the suspension.

“We have received a valid report that your account @_NicolasSarkozy is engaged in nonparody impersonation. Although Twitter firmly believes in the freedom of expression, impersonation that misleads, confuses or deceives others is against the Twitter rules,” said the message..

Internet Sans Frontières said the accounts “did not violate Twitter’s user terms because they were clearly parodies.” Specifically, the organisation said the @_NicolasSarkozy account stated it was a parody in its profile.

On Monday, the hashtag #SarkoCensure was trending strongly on Twitter in France as users commented on the reported suspensions.