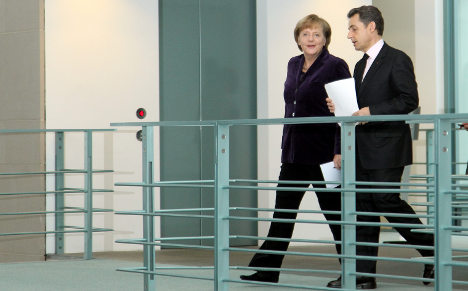 German Chancellor Angela Merkel said she could imagine a levy, but one imposed only within the eurozone and praised French President Nicolas Sarkozy’s “good example” on the issue, after the Frenchman had said he was prepared to go it alone if no Europe-wide accord could be struck.

The French announcement that it could implement the so-called “Tobin Tax” unilaterally was met with dismay by many European leaders last week, but Germany said it was willing to work with Sarkozy on the idea.

Merkel said negotiations on a text to more strictly tie together eurozone countries’ budgets were progressing well and also announced Paris and Berlin were ready to accelerate payments into a permanent fund for future possible bailouts that is due to come into force later this year.

“Germany and France are ready to review … to what extent our payments can be accelerated in a certain way and thus once again make our trust in and support for the eurozone clearly visible,” she told reporters.

European leaders are hoping to have the new budget regulations in place by the beginning of March.

They are also looking into ways of arming the the European Stability Mechanism fund, with its resources in one go, rather than putting in smaller tranches over several years under the current plan.

The meeting between Merkel and French President Nicolas Sarkozy, who have been at the forefront of efforts to combat the eurozone debt turmoil, came as the euro tested near 16-month lows against the dollar, amid new fears over the future of the bloc.

A recent slew of disappointing economic data, combined with renewed fears over the banking sector, have revived concerns that the eurozone is heading for a deep recession as the crisis shows little sign of easing.

Fuelling these fears, data earlier Monday showed that banks parked a record sum of cash at the European Central Bank, suggesting they are wary of lending to each other in the critical interbank market.

And for the first time, Germany sold five-year bonds with a negative yield, implying investors are rushing for the relative safety of debt issued by Europe’s top economy that has thus far proved resilient to the crisis.

However, there were also signs that even this safe-haven status could be called into question, as industrial production dived by a worse-than-expected 0.6 percent month-on-month in November.

Meanwhile, the crisis also appeared to be returning with a vengeance to Athens, where it began, with the International Monetary Fund reportedly expressing growing doubts about Greece’s long-term ability to reduce its debts.

A team of international auditors was due to return to Greece next week to assess the country’s economy after Prime Minister Lucas Papademos warned of an “uncontrolled default” in March if no further aid was forthcoming.

Merkel called for the “rapid implementation” of reform measures in Greece, warning that new bailout funds could not be paid out otherwise.

Amid renewed speculation that Greece could be forced out of the euro, she nevertheless stressed: “It is our intention that no country should leave the eurozone.”

Analysts were largely unimpressed by the meeting.

“The growth initiatives lack detail and negotiations on other elements are ongoing. At least on Greece they remain committed to help the country,” added the analyst.

Merkel had sought to shift the focus from austerity to growth during the press conference.

“With a combination of solid finances and drivers of growth, we want to make clear that we are determined not only to maintain and stabilise the euro but also want a strong, modern and competitive Europe,” said the chancellor.

Traders appeared to shrug off the meeting, with little movement in European stock or bond markets.

The gathering in Berlin kicked off a flurry of diplomatic activity as European leaders seek to draw a line under the crisis.

Merkel was to host IMF chief Christine Lagarde for closed-door “informal talks” in Berlin on Tuesday, her spokesman said.

On January 20, Italian Prime Minister Mario Monti will host Merkel and Sarkozy in Rome, ahead of a meeting of eurozone finance ministers in Brussels three days later.

Speaking late Sunday in Rome, Monti denied that the euro was in trouble but warned of a “systemic crisis” in Europe driven by debt.

“The rate change applies from tomorrow, September 23rd 2022”, SNB said in a press release on Thursday.

It added that “inflation [in Switzerland] rose to 3.5 percent in August and is likely to remain at an elevated level for the time being”.

The latest rise in inflation is principally due to higher prices for goods, especially energy and food, according to the bank.

The SNB’s forecast for the evolution of inflation is, however, positive.

“Without today’s SNB policy rate increase, the inflation forecast would be significantly higher”, the bank said.

In mid-June, the SNB tightened interest rates by half a percentage point for the first time in 15  years. Since then, inflation in Switzerland has continued to rise. For August 2022, the statisticians reported inflation of 3.5 percent, after 3.4 percent in June and July.