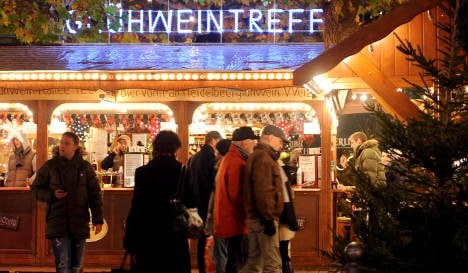 Police are hunting a man who visited two Christmas markets in Berlin Thursday evening and offered visitors a swig of a poisonous beverage that so sickened them that they had to be hospitalised.

The man first was seen at a market in the capital’s Charlottenburg district, where he told two foreign visitors he was a new father and wanted to celebrate by offering them free drinks of alcohol, Der Tagesspiegel newspaper reported on Friday.

Shortly after drinking, the 26-year-old Italian and 24-year-old Slovakian fell seriously ill, suffering seizures and vomiting, police said. The 24-year-old was taken to the hospital after falling unconscious.

At about 9 pm the man was spotted again at a holiday market in the Mitte district. He repeated the same story to three women in their 20s, who accepted drinks. After they began vomiting and drifting out of consciousness, officials rushed them to a clinic, the newspaper reported.

Police said the victims may have been given a mixture of alcohol and so-called “knockout drops” meant to render people unconscious so they can be robbed or sexually assaulted.

But because the man did not rob or otherwise assault the Christmas market victims, it is unclear what his actual malevolent motivation may have been other than making people sick.

Police are now searching for a slim man in his mid-40s, about 1.8 metres tall with short, dark blond hair.