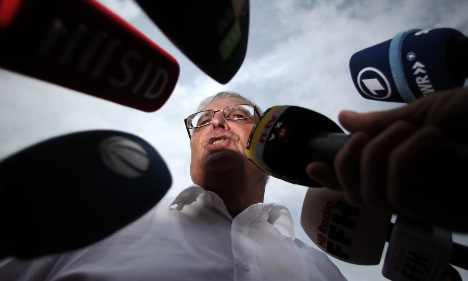 German football has launched a bad-tempered search for a new boss after the shock resignation of the DFB football association president with a meeting to discuss the options set for this week.

Theo Zwanziger plunged the German football world into turmoil on Friday night by announcing his resignation – and infuriated many of his erstwhile colleagues by announcing it in the sensationalist newspaper Bild before telling anyone else.

And while anger at the way the 66-year-old made his announcement was still fresh, Zwanziger nominated his preferred candidate to take over – Erwin Staudt, former head of VfB Stuttgart – bypassing the man who considered by many as a worth heir, DFB secretary general Wolfgang Niersbach.

Zwanziger has been in charge of the DFB since 2004, and was due to continue in his job until the end of 2013. He will now step down in October 2012, just after the end of the UEFA European Championship next summer.

Zwanziger’s presidency started off well, the Frankfurter Rundschau paper reported on Monday. It said he modernised and liberalised the association, managing the 2005 match fixing scandal surrounding Robert Hoyzer well, and reacting sensitively to the suicide of national team goalkeeper Robert Enke in 2009.

But his reaction to the tax avoidance scandals affecting a row of referees was heavily criticised, while public spats over the contract extensions of national coach Joachim Löw and team manager Oliver Bierhoff damaged his image further. He then joined the executive committee of world football association Fifa – itself in serious trouble over corruption affairs.

And although Zwanziger said he had made the decision to resign after Euro2012 this summer, and that it should have been obvious he was leaving. Writing in Monday’s regional paper, he said the decision was, “neither impulsive nor actionist. In contrast, it is well considered.”

Yet he was heavily criticised, for poor style – and for his choice of successor – by Franz Beckenbauer, honorary president of Bayern Munich and widely known as the Kaiser of German football.

“No question, Dr Staudt is an exceptional man and super person as well. But he comes from the league. He would have to be elected by the associations, and there he has little chance. I believe the vote will go in a different direction,” said Beckenbauer.

“That is his style, making this decision practically alone,” said Beckenbauer, calling it an act of desperation. He said he thought Zwanziger had taken public criticism personally and said Niersbach would be the best man for the job.

Löw, training with the national team in Ukraine, said he was determined for the tumult to have no effect on the team’s campaign for euro 2012.

“We first heard the news in Kiev and were of course all surprised,” he said.

“But this will not disturb our concentration and preparations. We are concentrating on our job,” he said.

Although Zwanziger plans to stay in his job until October 2012, he could be forced out earlier to prevent what many delegates at this weekend’s conference of the German Olympic Sport Association called a lame duck presidency.

A DFB meeting hastily convened for Wednesday will discuss the candidates. Zwanziger’s successor will be elected by 172 votes from the amateur clubs and 74 from the professionals.