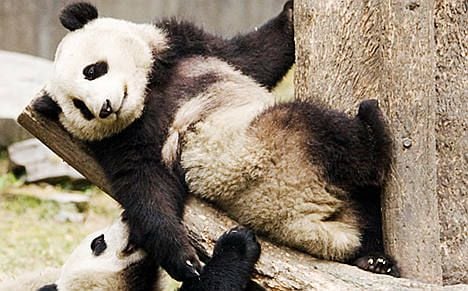 As world leaders held frenzied talks to try to save the crisis-hit eurozone in the south of France earlier this month, the fate of two giant pandas destined for a French zoo hung in the balance.

Negotiations had been conducted at the highest level of government in Beijing and Paris, and the deal was to have been announced at the G20 summit in the French resort of Cannes, before it was delayed by more pressing matters.

Details of the deal — including the identity and age of the two pandas — will remain a secret until Chinese President Hu Jintao gives his approval, an indication of how seriously China takes its famous panda diplomacy.

For now, the two fluffy bears at the heart of the high-level political drama are happily crunching on bamboo at a breeding centre in the southwestern city of Chengdu, where they will be kept in isolation for three months.

There, they will spend their days munching through 100 kilograms (220 pounds) of bamboo — collected from nearby mountains every day and then washed — and producing 30 kilograms of excrement.

Li Mingxi is director of the centre, where 108 pandas aged from a few months to 27 years old live in grassy enclosures where they climb trees, eat and sleep.

He said he knew little about the pandas destined for France, describing it as an “affair at the state level”, although he did reveal that the animals receive “special treatment” before going overseas.

The pair will be the first pandas sent to France since the death of Yen Yen in 2000, who was given to the country’s former president Georges Pompidou in the 1970s along with another panda, who died shortly after arriving.

In those days, the animals were given away under Beijing’s famous “panda diplomacy”. Now, zoos have to pay large sums of money to acquire the pandas — and even then, they are only on loan.

China has loaned dozens of pandas to other countries in recent decades including the United States, Thailand, Singapore, Spain, Austria and Japan.

Despite the high cost, they are highly sought after for the publicity they bring to zoos. A giant panda cub at the Chiang Mai zoo in northern Thailand had millions of fans and her own live 24-hour reality television series.

The pandas heading to France will be accompanied by at least two Chinese “experts and medical staff” who will be replaced every six months, Li said.

Pandas are encouraged to breed during their maximum 10-year stay abroad, and any offspring eventually return to China, where just 1,600 of the endangered animals remain in the wild, with some 300 others in captivity.

If they refuse to “have sexual intercourse naturally” — a common problem with pandas, which are well-known for their poor breeding abilities — the keepers will use artificial insemination, said Li.

“In terms of breeding, the most important thing is that they love each other,” said Li.

“It’s the same for people — you may love someone but he or she doesn’t love you.”

Given the lengthy negotiations and hefty price tag, Beauval zoo will be hoping the cute and cuddly bears — which weigh as much as 150 kilograms each — will be a major draw for visitors.

“The reception centre is built. The Chinese have visited it and from what I heard, they said it was the most beautiful reception area they had seen outside of Chengdu,” French Ecology Minister Nathalie Kosciusko-Morizet told AFP earlier this month.

“The panda is such a symbolic animal that such loan agreements require agreement from the highest level in China. That’s why it still lacks the final approval.”

Norway told by China not to ‘politicise’ Nobel Peace Prize

China becomes one of Norwegian’s biggest owners after rescue deal